The name "Advergame" comes from the combination of advertisement and video game and is used to categorize games that are used to create brand awareness, and familiarity. [1] By creating advergames, companies hope to increase awareness of their brand and to keep consumers interested by creating interactive experiences through video games. These games are often accessible on social media sites, companies' own websites and as downloadable content on apps on mobile devices. In game advertising (IGA) refers to commercial messages embedded within the content of retail-accessible video games, online electronic games, or apps. In this format, the company provides financial support for the creation of the game and in return the game developer weaves the product into the action of the game, providing greater brand exposure for the company. [2]

Creating an advergame is significantly less expensive than a television or print ad and can be more effective as they persuade on a subconscious, emotional level. Children are 77% more likely to visit internet pages with advergames and spend 88% more time on these pages. [3] Additionally, advergames exist in formats that are not limited by time, such as a TV ad, meaning consumers can interact with the advertisement for much longer. Advergames are also increasingly more attractive to companies as their interactive format helps to further engage the audience by creating a favorable experience, persuading consumers to purchase the product. [4] Research has found product message recall 90% higher with consumers exposed to branded games. [5]

It is difficult to define the exact time when brands and companies became a part of games. In 1973, Moonlander was released by Digital Equipment Corporation with a version that included a hidden feature in which a McDonalds would appear if you landed in exactly the right spot. This was likely a joke by the game programmer rather than a feature sponsored by the fast food empire, but it is said to have likely been the first instance in which a brand was integrated into gameplay. [6]

McDonalds continued to have a presence in the game industry when in 1982, Parker Brothers created a game in which Ronald fed aliens with fast food products. Throughout the 1980's, other companies began to look to games as a source for advertisement. Coca-Cola worked with Atari to produce a game that was given away as a gift to participants of the company's sales convention. The game was a special version of Space Invaders with the rows of aliens replaced by P, E, P, S, I and the command ship as a Pepsi logo. When a player completed the game by shooting down as many enemy characters as possible within the three minute limit, the message "Coke Wins" would flash across the screen. There were several other advergames released that year including "Tooth Protector" from Johnson & Johnson (http://www.atariage.com/screenshot_page.html?SoftwareLabelID=564&ItemTypeID=SCREENSHOT) as well as "Kool-Aid Man" made for General Foods (http://www.youtube.com/watch?feature=player_embedded&v=kIoZqxbK3e4). These were not particularly successful likely due to the video game crash of 1983. [7] In the late 1990s advergaming shifted to more product placement within games rather than custom made games revolving around products. This as in line with the general maturational shift in consumers as they became more aware and critical of branding tactics. By slipping branding into more realistic gaming worlds, agencies could make the argument that such placement made the gaming world more realistic. In this way product placement has enhanced gaming's evolution into experiential realism by using products already common in gamer's daily lives. For example, Zippo lighters are featured in "Die Hard" and Energizer batteries are used in "Alan Wake". [8] From 2000 on, product placement in games has only increased. Some developers even place place products for free in an effort to make the game world more realistic. Using games as a form of advertisement is especially advantageous for companies as gamers are using products rather than watching them be used by a third party. The shift today has been from brands accompanying traditional genre-based story lines to brands replacing those story line all together. Games are often created entirely for the sake of the brand and most major food and beverage companies have a online game featuring their products. A recent game, "Fashion Finder: Secrets of Fashion" uses the searching out and identification of brands as a mechanic of the game as players are sent off to different cities around the world to identify logos hidden in realistic scenery. In this way, participatory advergaming is reinforcing every brand found in the game while also training the player to have a critical eye for brand logos. [9] 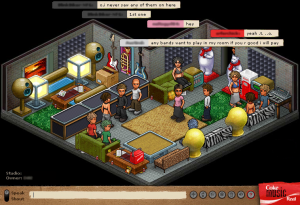 Players socializing in a player owned room in MyCoke

A re-skinned game uses a format of a previous game to inspire a newer game that has greater product placement and influences. MyCoke (formely Coke Studios) was a successful example of the re-skinned advergame genre. The game took the engine of the popular social game, Habbo, skinned it and added items that advertised Coca-Cola products. An additional music creation mode was also added. ABC Family Santa's Workshop Fandango Popcorn Blaster

Game arenas are collections of multiple casual games all found in one place, usually as a page of a company's website. Through game arenas companies can match a more diverse library of addictive games to the demographics and interests of their target audience. A game arena is meant to engage and retain players, yielding a boost to a websites retention, page views, and ad revenue. [10] mylifetime.com seventeen.com aarp.org

In Game Advertising or Product Placement

Some games are not made by or for companies, but rather contain product placement throughout the game either to promote a certain brand or to make the gaming world more realistic.

In February 2008, AARP added a game arena to their website as part of an overall redesign of the site. They nonprofit experienced a 294% increase in page views, totaling 4.5 million, after the launch. 52% of overall traffic to the site was contributed to the games. The arena consists of casual games including Mahjongg, Pyramid Solitaire, Eggz and Free Cell Solitaire and are all aimed to increase interaction times, averaging 15 minutes or more for the site. [11]

The National Geographic Channel (NGC) was interested in expanding its engagement efforts beyond just the television screen and onto the internet. To further engage their audience, NGC hired Arkadium, a top game development studio, to create a customized game to educate audiences on the periods of time when dinosaurs ruled the continents. Arkadium developed a "Fossil Hunt" that both challenges players to find fossils and build dinosaur skeletons as well as helps expand their knowledge on the findings of paleontologists. During a dinosaur special show's airtime, "Fossil Hunt" became the site's most visited and addictive interactive features with an average playing time of over seven minutes per game. The game was responsible for 8% of the site's total traffic while the show was being aired. After "Fossil Hunt", NGC outsourced to Arkadium a second time to build a game that would pair with their two part series, "Fight Science". The game transforms the player into a martial artist through a series of training regimens and tests including form, balance and force. The game was meant to be fun to play, addictive and appealing to men, while also completely free of violence. Fight records are saved for each player and can be sent in the form of a "challenge" to friends to beat their score. In this way, players were encouraging others to play the game, adding an important viral aspect to the game. At it's peak on the day of the show, the game attracted approximately 7,000 game visits and averaged at least two game plays per visit. [12]

When the company launched their slogan, "America Runs On Dunkin'", they also created an online presence that aimed to literally keep America Running during the day. The site included a store locator, a printable Dunkin' Run Order Form, the campaign TV commercial and an addictive Dunkin' Drop casual game. The casual, flash-based game had players click on matches of two or more Dunkin' Donuts symbols in order to remove them. In the first three months, the site generated 103,753 unique visitors and 200,966 page views. The game is the second most frequently viewed page after the homepage and 11% of visitors have bookmarked the game. [13]