The most basic definition of the dating sim is a game where the protagonist must choose between multiple potential romantic partners and attempt to woo them. Unlike with the Visual Novel genre, Dating Sims place a lot of emphasis on rpg type elements, such as statistics, shown by keeping a girl's affection levels up and boosting up stats (intelligence, strength, etc.) through taking classes or participating in activities. Dating sims are almost exclusively Japanese, to the point where popular Japanese media can recognizably parody aspects of the dating sim genre. In the West, dating sims are still seen as a niche market. Despite Western thought, dating sims are not necessarily pornographic. In fact, pornographic dating sims are a sharp minority in commercial dating games.

While the genre started in the 1980s, arguably the first dating sim to make it big is Tokimeki Memorial, first released for the PC in 1994. Tokimeki made it big thanks to word of mouth. Due to its popularity, the game been remade multiple times (Tokimeki Memorial: Forever With You, Tokimeki Memorial: Densetsu no Ki no Shita de, etc.) and has been ported to multiple systems (Game Boy Color, PlayStation, Super Famicom, mobile phones, PSP). There have been multiple spin-offs (such as puzzle games) and multiple adaptations (such as an anime, Tokimeki Memorial Only Love.)

Aspects of dating sims have been transferred into modern non-dating sim games. Modern games have optional "social link" features, where you can build up relationships between supporting characters granting different benefits. These are often found in Tactical RPG games, where unlocking a social link can boost certain stats. For example: in Fire Emblem: Awakening, pairing up two units in battle improves their relationship, which can grant "rank" upgrades in the Social menu. Upgrading a character's social rank unlocks cutscenes where character pursue romantic relationships or improve their friendships. A higher social rank also means that characters will give each other better benefits (higher dodge rate and higher attack skill, for example), with the S rank as the highest. Through cut-scenes, their relationships improve as the characters climb up ranks, culminating in S rank, which is only unlockable with two characters of the opposite sex and which enables them to marry.

Because of the fact that they're relatively easy to make, dating sims have been created by many indie designers. Visual novel creation platforms such as Ren'Py and Novelty exist and are designed for people with minimal experience coding. Other options are flash games, which are less focused on characterization and are hosted on websites such as Newgrounds. Newgrounds has two main dating sim pages: an all ages one and a page for adult games, found under the "Adult Features" collection instead of the "Games" tab. The adult games page is easily more popular, with some games reaching views in the millions. With titles such as "AchingDreams2 Hentai Game," "Meet'N'Fuck Road Trip," and "Orgasm Girl," it's pretty obvious what sort of direction these games are heading into.[1]

Just like how there are multiple suitors, each suitor has multiple endings. The endings typically come in two types: good ending and bad ending. The good ending consists of the suitor confessing his/her love, as well as the possibility of a physical reaction (kissing, holding hands, sex, etc.). The bad endings are typically only "bad" in the sense that the player does not woo the suitor--unlike "bad endings" of other games, death or other permanent consequences rarely happen. Ends can be fairly bittersweet: a good end can involve the couples in a long distance relationship or a deathbed confession of love, but it does involve the couple getting together.

In most games, the relationship between the avatar and the potential suitor is measured in a meter. Good interactions boost your meter, bad interactions reduce it. In order to woo a suitor and get the "good ending," the player needs to pick the best choice out of multiple options (usually two to three) that reflects the suitor's personality. Picking the wrong choice can have the meter decrease, potentially harming the player, depending on the game.

Examples of the Genre

The Tokimeki Franchise is most notable for introducing the "bomb" feature. The player needs to keep his relationship up with all the potential suitors. If one falls too low, then the suitor gains a "bomb." When the suitor has a bomb, then she'll gossip about the player to the other characters, lowering his relationship with them. 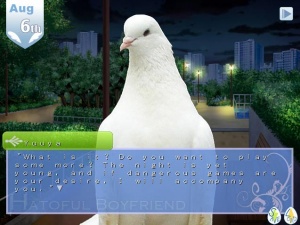 One of your potential pigeon boyfriends

Hatoful Boyfriend is a parody of the dating sim genre. While Hatoful Boyfriend uses many typical dating sim characteristics and many character archetypes featured in dating sims, it is notable for one parodic option: all of your suitors are birds. The cheap price of the game helped spread it to the popular consciousness. Popularized by a Let's Play on the website Quarter to Three, Hatoful Boyfriend took the Internet by storm, as shown by a massive amount of fanart and fanblogs on sites such as Tumblr and Pixiv, and helped bring dating sims back into the public consciousness.[2] The game plays with the expectations of genres: aside from the obvious change in expectations (you date birds), the game is very self-referential and plays with tropes inherent in video games. Hatoful Boyfriend shifts into a fighting style game during one potential suitor's route, and the second half of the full version turns into a dark, espionage thriller.

Katawa Shoujo is a free to download dating sim game. Katawa Shoujo is described as a "a bishoujo-style visual novel set in the fictional Yamaku High School for disabled children, located somewhere in modern Japan." [3]. All of the potential suitors in Katawa Shoujo have disabilities of some kind: one girl is blind, one is an amputee, etc. Katawa Shoujo plays with notions of disabilities, and how different people react to disabilities. The protagonist has a recently developed arrhythmia--and through his and the suitors' point of view, traditional notions of disabilities are explored and debunked. The game portrays all of the disabled characters as normal people. The optional adult content means that the game can be played by anyone.

Despite dating sims being a prevalent focus of Japanese media, they have received little attention in the West. Any sort of scholarly analysis of dating sims is minimal. Popular analysis tends to focus on the "strange" games, as shown in this article titled 14 Dating Sims You Won't Believe Actually Exist. The traditional Japanese dating sim tropes of high schoolers wooing high schoolers of the opposite gender rarely are commented on. Instead, gamer websites focus on the games that radically stray from the norm, as shown by the massive analysis of Hatoful Boyfriend. 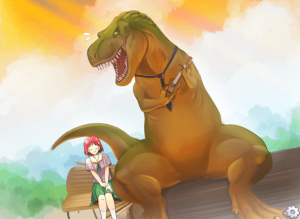 Taira serenades the player on the ukelele