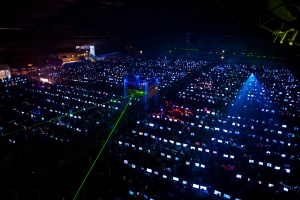 DreamHack, the world's largest LAN party and host of many E-sports events

E-sports (abbreviation for Electronic Sports) is the hybrid name given to video games that are played competitively, specifically a video game where a player can be deemed a "professional". E-sports can refer to team games or single-player "one versus one" games. It is debatable whether or not single-player games without direct competition are E-sports, for example, high scores on Donkey Kong. However, speedrunning has become a very popular form of competitive entertainment, so it could be argued that any form of video game competition, whether live or recorded, can be an E-sport[1]. Games that are commonly considered an E-sport are games that can be performed in front of large audiences for a spectator experience similar to "normal" sports (football, baseball, etc). The four accepted genres that fit this criteria are First-Person Shooters, Real-Time Strategy games, Multiplayer Online Battle Arenas (MOBAs), and Fighting games.

Recently, American E-sports competitors were recognized as international athletes and became eligible for P-visas[2], the same type of visa given to Olympic athletes.

Competitive gaming has existed since the creation of video games that kept scores in the early 1970's, such as Donkey Kong. The goal with these early games was to get the highest score you could and then compare it with players from different regions. Before the internet, the regions that one could compete were limited, and records were kept simply as bragging rights between friends. During the 1990's with the onset of the internet, players could compete in their favorite game online to make it onto leaderboards or beat players who were well-known on forums or websites. But, there was still no formal structure behind competition.

The E-sports community in South Korea was the first highly successful scene. The Korean model is effective because of the level of passion from the gamers and the gaming community as well as the fertile gaming environment built around the community by the government. The high-speed internet available in South Korea, a government focused on providing the necessary infrastructure, high profile sponsors, and PC bangs (high-speed internet cafés with hourly rates) are all key components driving the success of E-sports on South Korea. [3]

E-sports as we know it today originated in 2000 with the first World Cyber Games (WCG) tournament in South Korea.[4] WCG was an international video game competition sponsored by Samsung. Early events such as WCG and Major League Gaming (MLG) (founded in 2001) were extremely small, uncoordinated tournaments whose spectators were usually only the people who attended the event to play. The tournaments were usually held in the conference halls of a hotel. In some cases, large events might be able to afford a small convention center. Tournaments almost always happened over the course of a weekend (and still do) because the overwhelming majority of competitors and spectators are high school and college students.

For the first few years of E-sports, spectating was only available to people who traveled to an event to watch in-person. In 2006, however, MLG partnered with the USA Network to bring the entire 2006 Pro Gaming Circuit to network television[5]. Tournament owners, however, realized that the majority of their market (males aged 18-25) did not watch network television, instead they watched online streams[6].

During the later half of the 2000's and especially into the 2010's, E-sports began to grow at exceptional rates. In 2014, it is currently estimated that 70 million people world wide watch E-sports.[7] This growth can almost directly be attributed to online streaming sites, such as TwitchTV. TwitchTV allowed for E-sports professional players to live stream their own gameplay to their fans. This is something that no other modern sport has the capability to do. Fans are able to connect with their favorite professional players on a much more personal level than any other type of professional athlete. Live streaming sites like TwitchTV also allow large tournament owners such as MLG, Blizzard Entertainment, Riot Games, eSports League, eSports Gaming Network, GSL, OneGameNet, and many more to partner with TwitchTV to centralize their broadcast without the overhead of creating their own streaming service. Today, Riot Games is at the forefront of this market with their daily broadcast for the League Championship Series (LCS). Their channel has over 400 million unique views and over six hundred thousand followers. [8]

As we move later into the 21st century, some developers are designing their games with E-sports in mind. Specifically, this means that games usually now have a spectator mode, LAN and online capabilities, leaderboards, and online rankings.

First-Person Shooters were among the first games to make it into the large tournament scene. The first two prominent titles were Valve Software's Counter Strike and id Software's Quake.

Quake, released in 1996 with many subsequent releases, is an Arena Shooter played in a one vs one format on the PC. Players battle on small maps with a focus on power-ups and positioning. Quake was a popular game in the E-sports community because of the raw skill and hand-eye coordination needed to play the game at a professional level. Quake is still played today at E-sports competitions, most notably its recent rendition Quake Live makes an occasional appearance at the Intel Extreme Masters event.

Counter Strike was originally a mod of Half-Life distributed within a niche community. Eventually, the mod became so popular that Valve Software hired the creators of the mod to work for Valve full-time and create a feature release of the game. Counter Strike, unlike Quake, is played in a team format, specifically five versus five. The goal of the game is to either plant a bomb (as "Terrorists") or defend the two bomb plant sites (as "Counter-terrorists"). The game is played for a specific number of rounds where each round is won by either detonating/defusing the bomb or eliminating the entire enemy team. While individual skill is still a factor, Counter Strike is centralized on teamwork and communication. Each players screen can be spectated, allowing an audience to be brought directly into the action.

Other notable First-Person Shooters are Bungie/343i's Halo and Treyarch/Infinity Ward's Call of Duty both for the Xbox console. Both titles are most prominently played is a four vs four format.

Real-Time Strategy (RTS) games are commonly compared to a pianist playing chess. Two series of games have dominated the RTS scene: Warcraft and Starcraft (and Starcraft 2), both released by Blizzard Entertainment. RTS games are very spectator-friendly because of the style of the game: two players waging war against one another. As a spectator, one hovers above the world watching each opponent build their army and move it into position for combat. RTS matches are both slow and strategic and mechanically fast paced. To a spectator, armies seem to move slowly into position across the battlefield, but if you watch the players, they are performing up to 400 effective-actions per minute (at the professional level). This speed and precision is what makes RTS matches look so smooth to spectators.

Dota 2 is another prominent MOBA. Dota 2 has had slightly less success on a mainstream level than League of Legends has, but that is not to say that it is not a successful game. Valve Software hosts a yearly Dota 2 tournament called The International. Whereas Riot Games funds the LCS and League of Legends competitively, Valve takes an alternate route with The International by allowing players and fans to contribute money to the prize pool in exchange for in-game items and additions to the game. The current The International 4 prize pool sits at over $5 million. Valve Software recently published a documentary titled "Free to Play" that follows professional players who competed at The International 1 in 2011.

Fighting Games are the fastest-paced E-sport. Matches are one versus one, usually best of 5 series. The popular titles in the Fighting Game Community (FGC) are Super Smash Bros Melee, Marvel vs Capcom, Street Fighter, Tekken, Mortal Combat,and Dead or Alive. The FGC is the tightest-knit of all of the E-sports communities, stemming from grassroots competitions at arcades and small, player-run events. To this day, FGC tournaments do not usually receive developer support. EVO, the largest FGC tournament of the year, is community-run and funded.

E-sports is among the fastest, if not the fastest, growing online form of entertainment. In 4 years, from 2010 to 2013, Major League Gaming saw a 1500% growth in online media hours consumed[10], almost 5 times as much as NCAA March Madness. From 2010 to 2012, MLG saw a 636% increase in live viewership.[11] These numbers are unrivaled by any other form of online media.

E-sports also has a large cultural impact on gaming as a whole. Gaming, especially online gaming, comes with a bad reputation of being vulgar and inappropriate. Professional gamers, though, are held to a higher standard than their fellow online players. When at events and tournaments, professional players are expected to provide a good example for fellow gamers who are either spectating in-person or via live stream. The hope of tournament organizers is that, through this display of good sportsmanship, online culture will lean away from its former bad attitudes and vulgarity, as well as to show new spectators that it is a minority of gamers who are toxic in the online community.

In a recent development, ESPN has announced that the 2014 X Games will be hosting eight professional teams to compete in the "MLG Call of Duty: Ghosts" tournament. [14] The top teams will be receiving the standard X Games medals representing the similar participant and viewer bases shared by extreme sports and E-sports. MLG is scheduled to make its debut at the 2014 X Games in Austin, Texas.