Fighting Games are a type of game where the player controls an onscreen character, or sometimes a group of characters, and battles against an onscreen enemy opponent. Each character has a health bar usually displayed on the top of the screen, and the goal of the game is to fight until either the players health bar or the opponents health bar reaches zero. Characters in Fighting Games are unique while still being equal in strength in order to maintain balance within the game. This gives the players choices as to which character to choose and what sort of play-style the player would like to use. One character may be aggressive and want to get close to a character to deal damage, while another character may focus on being long range and avoiding the enemy character on the screen to win. Players must be able to utilize their characters potential, as well as perform techniques such as Blocking, dashing, dodging, counter-attacking, and combos (linking basic attacks to execute a series of moves that consecutively hit the opponent). Most Fighting Games today allow the player to execute special attacks by inputting a sequence of buttons with precise timing, and each character caries his/her own special attacks unique to that character for the player to use. Fighting games are one of the first genres to be adopted as an E-Sport due to its competitive nature of placing one player against another. 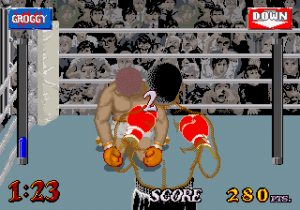 Fighting Games originated back in the coin-op era and because of this it is hard to pinpoint when Fighting Games became a genre. It is also hard to definitely know what was the first Fighting game to have existed.[1] It is simple to say that Street Fighter II was the first fighting game to define the genre to how it is viewed today, but what were the games that started the trend? There are two that were released in 1976 that can potentially be defined as the first Fighting Games of their time. The first game is Knights in Armor, where two players will control a black knight and a white knight and would battle each other by jousting a couple of times. In essence, it has two players that fight each other until one player remains victorious based on the number of joust made by each player. This game however does not have carry some of the attributes needed for what we define as a Fighting Game. It has no combos, no blocking, no dodging, and no health bars. Still, this can be attributed to the graphical limitations of the era, or even to the fact that fighting games had yet to be established with a particular set of rules.

The next game is known as Heavyweight Champ. This was a boxing game released in the same year as Knights in Armor, and had a very similar concept. Instead of jousting, a player would control the character by handling a boxing glove controller. This controller allowed the player to punch high or to punch low, and allow two players to fight against each other. Still the game did not have some of the fundamentals necessary to be called a fighting game at this point in time. Yet later in 1987, a remake was made for Heavyweight Champ which allowed players to perform more actions and started to base itself around the necessary attributes to be called a Fighting Game. The player was allowed to dodge from left to right while throwing punches and won when they knocked out the opponent [2]. Even though it is more defined as a sports game due to it being a boxing game, one can argue that by nature a boxing game is a Fighting Game. 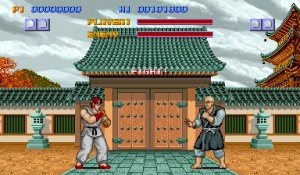 As the history mentions, Street Fighter is the series that started to mold the Fighting Game genre to its modern form today. Street Fighter I was released and playable in arcades starting 1987 but is not well acclaimed or prized within the arcade or Fighting Game community. The Game mechanics are too clunky and it is hard to execute combo's and special moves, which in 1987 were unique to this particular game and a new concept for players to grasp. The special moves were also not displayed on the cabinet of the machine, so players who did execute these moves almost always did it by mistake. The game is not very user friendly to new players and not everyone can enjoy the game because of its rather difficult learning curve. Therefore it could not thrive in an arcade environment where every game is competing for each player's time and money. It was not until Street Fighter II, which improved on all of the qualities provided in Street Fighter I and provided more fluent game-play that the genre took off headed towards success. 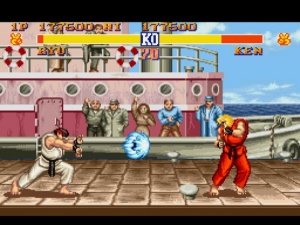 Marvel vs. Capcom provided characters that most people were familiar with and allowed players to use their favorite characters from movies and comic books to battle each other. This series combines the success of Street Fighter, created by Capcom, and Marvel's well known roster to make some of the best regarded Fighting Games in history. One of the key components that is added to this game to distinguish it from its competition like Street Fighter II is the ability to choose three fighters instead of just one. this allowed for players to create teams of fighters that could synergize with each other and open up new opportunities for customization. Now each player would choose three characters instead of one and the players would have to defeat all of the characters on the opponents team as opposed to just the single player that was usually seen in Street Fighter. It also brought in the mechanic of Assist. Each player has three characters, but only one of those three characters is allowed to be on the screen at any given time. This made the game at it's core a fighting game with more playable characters. The assist mechanic however allowed the characters on any given players team to come onto the screen and assist the "main character" who was on the screen at the time. Since these new mechanics were added and there are more characters that need to be knocked out by the players, the game evolved to play at a much faster pace than Street Fighter, and allowed for combos that exceeded the 100 hit mark. There were also some exploits that allowed for Infinite combos, where the combo would not stop and would continue until the character reached 0 hit points. It created a new type of atmosphere than Street fighter which made it important and unique withing the fighting game history.

Mortal Kombat took the Fighting Game genre and made the violence within the game hyper realistic while still maintaining the foundation given by the Street Fighter series. Mortal Kombat is not only crucial to the development and innovation within Fighting Games, but it has also influenced the video game industry as a whole. Mortal Kombat is widely known for being one of the games that influenced the creation of the ESRB rating within video games. This is due to the games violence and how arcades would not regulate the usage of arcade machines. This meant that children were able to walk up to the Mortal Kombat arcade machine and play the game, being exposed to hyper realistic violence. Parents were furious that there was no regulation for this game and that is how the ESRB rating was created. Other than the creation of the ESRB rating, this game did not actually provide any new and innovating mechanics for the fighting game genre. Mortal Kombat merely experimented with being a violent fighting games that depicted gruesome images, but the mechanics were almost identical to that of Street Fighter. 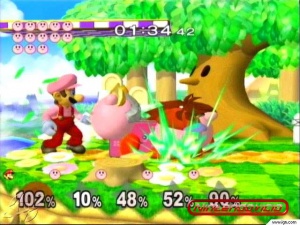 The Super Smash Brothers series is one of the most successful and unique fighting games of its time. It was understood by Iwata that Fighting games were becoming an easy to follow formula and he wanted to create a game that was original in order to revitalize the genre.[4] So instead of having an hp bar that decreases to 0, he created a unique mechanic where when a character takes damage, they have a value that rises instead of falls. The higher this value becomes, the farther the character flies off the screen when he is touched by another malicious character. This created a unique concept as the goal was no longer to make your opponent "die" by reaching zero hit points, but rather to throw or hit the character off the stage in order to win. It is possible for a player to lose a life without taking any damage so long as he goes off the screen far enough to cause a death. Another unique characteristic about the Smash Brothers series is the lack of special moves that are executed with specific button inputs. There are still moves that you must execute using a combination of buttons, but they are much simpler than your everyday fighting game like Street Fighter or Marvel vs Capcom. This allowed everyone who picked up a controller access to all of a characters arsenal without having to have prior knowledge of the game or know about the special moves before actually playing the game. All of these factors contributed to its unique style, and because it was different from the already well loved and established fighting games, there was debate within the community on whether or not the game was an "actual fighting game." This caused the largest fighting game tournament in the world to question whether Super Smash Brothers should be put into the line up for competition. However it cannot be denied that this is a Fighting game at its core that has changed the way people view fighting games as a whole. 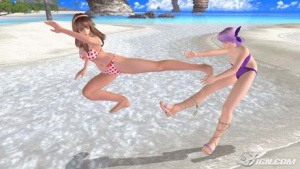 Significance within the industry

As seen from the Mortal Kombat Series, the creation of Fighting Games led to the creation of an ESRB rating which is essential for all video games today. The Fighting game genre was also the very beginning of E-sports, and allowed multiple other genres to follow along. While many will consider First-Person Shooters to be the first to bring E-sports into the main stream, Fighting Games provided a good foundation with the creation of EVO, which is now known as the largest Fighting Game tournament and one of the largest Game tournaments in the world. It has also cultivated a much tighter community than genres such as First-Person Shooters as fighting games would usually require two people standing in front of an arcade machine to battle against each other.