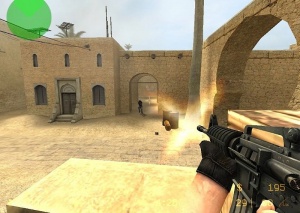 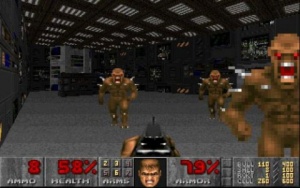 The modern form of the First-Person Shooter owes itself to the 1992 PC game, Wolfenstein 3d, developed by id Software. Wolfenstein 3d featured 3d environments and enemy models represented as 2d sprites.[1] The game is set in a Nazi castle during World War II, in which the player has to fight off Nazis in order to escape. The game was praised for its freely explorable environments, fast-paced action and advanced 3d graphics. It was a departure from the previously held side-scrolling shooter paradigm. Its longevity was increased by its easily modifiable content, which players used to design their own levels to create an experience beyond that envisioned by the developers. 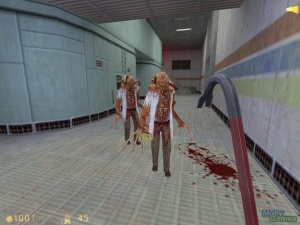 id Software followed up Wolfenstein 3d with the next landmark in First-Person shooter games with Doom in 1993. Doom is a science-fiction horror game in which the player takes control of the lone survivor of an accident involving an opened portal to hell. Improved lighting, a wide variety of guns (including the BFG), sophisticated lighting, networked multiplayer capabilities, and improved tools for player customization made Doom a huge success. Doom's influence ushered in a long line of so-called "Doom clones."[2] Many consider Doom to be the most influential First-Person shooter to this day.[1] 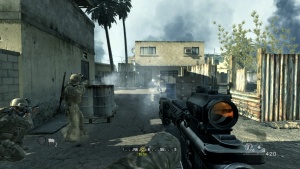 In 1998, Valve Corporation released Half-life, another science-fiction game notable for its strong narrative elements and realistic gameplay. With an engine heavily influenced by the work of id Software's John Carmack, Half-Life made the First-Person Shooter genre a viable platform for storytelling in video games. It also introduced the first instance of friendly non-player characters. From Half-Life spawned many important community mods, including Counter Strike, Team Fortress and Day of Defeat, furthering the tradition of player development options in the genre.[3]

First-Person shooters eventually made a shift to the home console in games like GoldenEye 007 and Perfect Dark for the Nintendo 64. These important titles led the way for the immense success the genre has enjoyed on consoles in recent years, most notably the Halo and Call of Duty AAA franchises. Some critics[4] believe that the annual releases of Call of Duty games have exhausted the once powerful FPS model. Recently the IP from Respawn Entertainment Titanfall (2014) has successfully synthesized existing mechanics to the genre such as freerunning, mech combat, and NPC combatants in multiplayer matches. Titanfall is hailed as the key formula to developing the next-generation FPS games with innovative materials.

The wide commercial success of the first-person shooter genre has led it to become a community favorite and several of these games have enjoyed time in the MLG Pro Circuit. These games include Call of Duty: Black Ops 2, Halo 3, and Call of Duty: Ghosts - which have been featured as some of the marquee events internationally.

Common mechanics of the First-Person Shooter include a fixed, first-person perspective, a variety of guns, ammunition management, health management, movement and aim. The player is usually given a wide array of weapons to fight or solve puzzles with, though only one or two may be used at a time. Many guns consume ammunition and additional ammunition must be found in the environment. A common control scheme has one set of inputs that influence the movement of the avatar's body, while another controls where the avatar is currently looking or aiming at. In many games, the aim of the player must change based on the currently held gun. For example, when using a grenade launcher, the player must take into account gravity's effect on the projectile. Movement, too, is an important aspect as the player is oftentimes faced with similarly armed adversaries, making running and hiding behind cover a necessity. At the competitive level, aim and reflexes are of paramount importance.

Military games feature a military theme, either in the past or present. Many have an emphasis on team play in a war setting with human beings being the primary enemy. Pacing varies wildly with games like Call of Duty allowing a fast-paced run and gun playstyle while other games, such as America's Army, are much slower and deliberate. 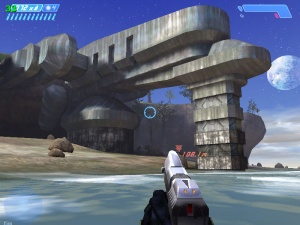 Science Fiction games are largely similar to military shooters, but are thematically based in a science-fiction universe. These games, like Doom, Half-Life, and Halo, usually feature monstrous enemies and technologically advanced weapons that may or may not be possible in real life. These games are usually fast-paced and may include horror elements as seen in Doom 3. 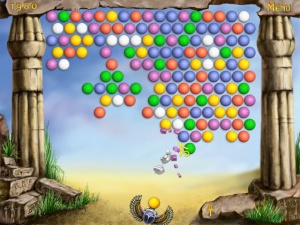 Puzzle games feature a first-person perspective and a gun-like tool to solve puzzles. A notable example is Portal, in which there is no combat, but the player must solve various puzzles using a gun that shoots two portals, linked to each other. Many games, like the Half-Life series, include combative and puzzle solving elements. In addition to the major platform puzzle shooters, there are arcade puzzle shooters, such as Bubble Shooter, which also falls under the Marble Popper genre. This single-player was originally designed for arcade style gameplay, but has recently been adapted to iOS, Android, MAC OS, Flash, Palm OS, and Pocket PC platforms.

Arena shooters are designed for primarily multiplayer competitive play. One of the most notable of arena shooters is Quake 3, developed by id Software. Arena shooters are characterized by fast-paced play, avatars that can jump and move significantly faster and higher than in real life, high health levels, physics based play, and a complete lack of narrative. These games usually pit individuals or teams against each other in small arenas to fight in a "deathmatch" with the winner being the one with the most points, oftentimes determined by kills. Arena shooters have enjoyed success in E-sports, as they lend well to fair, skill-based, competitive gameplay.

The Call of Duty franchise is widely regarded as the most valuable franchise in entertainment. With its latest release Call of Duty: Ghosts exceeding $1 billion in sales after just its first day on the market. [5]