Japanese Role-Playing Games (commonly known as JRPG) are games that have distinct features from Western-RPGs. JRPGs are typically made by Japanese developers but not exclusively. The term JRPG stems from console RPGs which defines games like Dragon Quest or Final Fantasy[1]. However, nowadays, since the term JRPG covers a wide array of different RPGs, it cannot really be seen as a genre but more as an umbrella term. One can say a game is a JRPG if it fits the criteria one would think belongs to a JRPG.

The development of the video game RPG genre is heavily influenced by table top RPGs such as Dungeons and Dragons. Before the widespread of the Famicom or other gaming consoles, computer gaming was quite popular in Japan. During the 1980s, Japanese RPGs began appearing in the market. The Japanese company Koei developed several games for the NEC PC-8801 such as The Dragon and Princess (one of the first Japanese RPGs), Seduction of the Condominium Wife (which has eroge elements), and Sword & Sorcery. Koei continued to produce other games such as Secrets of King Kufu (introduced the dungeon crawler genre) and Bokosuka Wars ( contained Tactical RPG elements). In addition, Nihon Falcom, another Japanese video game company, made a game called Dragon Slayer which featured a hack and slash dungeon crawler gameplay and is considered to be the first Action-RPG[2] .

In 1985, Yuji Hori, a Japanese game designer, created a game called Dragon Quest which took bits from various RPGs such as Wizardry, Ultima, and Black Onyx. The revolutionary thing that Dragon Quest did was it made the RPG genre more accessible to gamers. Dragon Quest is known as a light RPG because it does not require the player to draw his or her own maps, memorize specific names of spells or commands. Dragon Quest also simplified stats by implementing HP, MP, EXP, and levels rather than complex systems seen in previous RPGs. Dragon Quest did not require the player to learn tons of complicated rules but rather offered an intriguing story with intuitive gameplay.

Following Dragon Quest came the renowned Final Fantasy series which was developed by Square (now known as Square Enix). The Final Fantasy series helped popularize the RPG genre among home console gamers. The 90s was an era were many JRPGs debuted and became masterpieces. Such games include Chrono Trigger Secret of Mana and Super Mario RPG.

Nowadays, JRPGs have gained popularity as companies like NIS America have begun to localize even more JRPGs in the United States. Some of its notable localized JRPGs are games in the Disgaea series. However, the line between Western and JRPGs has become blurred making it difficult to properly categorize certain games into a genre.

When RPGs began to gain popularity, hardware limitations restricted games to have 8-bit graphics. However, as PCs and console hardware became more advanced, the graphics in RPGs changes as well. One element that is noticeable when looking at Western RPGs and JRPGs is the art style/ graphics. JRPGs usually opt for a Japanese anime look while Western RPGs lean more towards a realistic look[3]. Such a style is noticeable in games like Pokemon, Persona, or Dragon Quest. Final Fantasy's graphics have changed over time and begun to approach a more realistic look but the crazy hairstyles remain.

Since JRPG contains an array of sub-RPG genres, it can include many game mechanics. The majority include a basic stat system. As mentioned earlier, characters level up by EXP and can also improve their HP and MP. Depending on the genre, the combat system differs. In action RPGs, battles occur in real-time but in turn-based RPGs, a player must use a menu to decide his or her attacks. All games that fall under the RPG genre, require the player to strategize by exposing enemies' weaknesses. Depending on the JRPG, there can be random encounters which occur when the avatar is traversing along the main over world. Random encounters depend on the game but random encounters can be avoid, like in Pokemon, or completely turned off like in Bravely Default. Since random encounters and stats are main elements of JRPGs, JRPGs can have an emphasis on grinding. 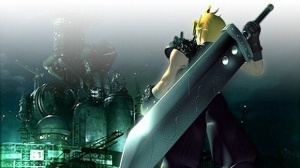 Generally, JRPGs are more story driven. For this reason, a lot of JRPGs tend to have a deep linear or non-linear storyline but not much feel for an open world like Western-RPGs such as Fallout 3 or Skyrim. Moreover, like any RPG, they can be text heavy with lots of character dialogue making the game pace feel slow. This is notable in games like Persona 4 or Bravely Default. The characters in JRPGs are usually pre-made characters and customization is not as vast as in Western-RPGs. This lack of customization is noticeable in games like Kingdom hearts or Final Fantasy 7 where the main protagonist is an immutable Sora or Cloud respectively.

Examples of games known as JRPGs

The Persona series is actually a spin off another influential JRPG series called Megami Tensei. While it is a JRPG, it also has some simulation elements. In Persona 4, the player takes the role of a high school student who must progress through Midnight Channel dungeons before a deadline set by the game. There are days in Persona 4 when you must attend school and after school, you have the option to do various activities such as Social link activities, shopping, or battling. What the player can do each day depends on the day itself. The dungeons the player gets to explore are like those found in dungeon crawlers (randomly generated dungeons).

Pokemon has grown to be the second biggest video game franchise in the world. It is funny to thing about Pokemon as a JRPG but it is one since it is an RPG developed by a Japanese developer and has certain elements found in other games categorized as JRPGs. One thing Pokemon lacks in respect to being a JRPG is a compelling story. While it is a linear game, the story of Pokemon in no way compares to Final Fantasy 3 or 7. In Pokemon, the player has the option to choose his own team as oppose to having the teammates be assigned like in most RPGs such as Kingdom Hearts where your party consists of Donald and Goofy most of the time. Each Pokemon the player catches has its own type which is similar to classes or jobs in other JRPGs. Catching Pokemon is similar to Dragon Quest in which you are also able to capture monsters to use in your team. The battle system in Pokemon is turn-based and intuitive since rather than having classes, you have types. It is intuitive because it makes sense why certain types are weak against others while in other RPGs, weaknesses can be less straightforward to recognize. As noted, Pokemon has many elements found in other JRPG games. Pokemon has elements of dungeon crawling and boss battles that require skill. A player can grind in Pokemon and in some cases, must grind in order to advance in the game.

Earthbound, originally called Mother 2 in Japan, is a cult JRPG that is praised as one of the best RPGs of the SNES. EarthBound took a lot of elements from the Dragon Quest series such as the perspective in battles.[5] It also removed random encounters and instead, encounters occur when Ness, the protagonist of EarthBound, collides with an enemy sprite on screen. The game differs itself from other JRPGs in its story. While JRPGs tend to make serious strong that strive to be epic, EarthBound makes fun of it. The enemies in the game are ridiculous ranging from dogs to hippies and starmen. 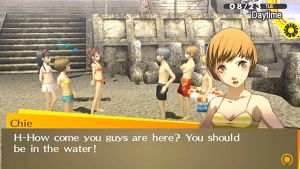 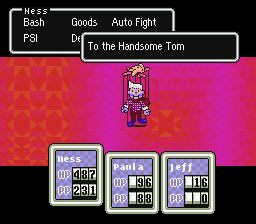 A look at the interesting battle system of Earthbound[2]

The amount of RPGs that are brought over from Japan to the US is relatively small compared to the actually number of RPGs available in the Japanese market. Certain JRPGs like the Disagea and Persona series tend to be niche titles that have cult followings. This means that not every iteration of the series is localized in the US. Other series like Final Fantasy, given its prominence, have established a big fan base and most games have been localized in the US.