One important aspect of party video games is that they can be played very quickly. This allows for many people to participate at the same time. If there are ten people and four controllers, turnover has to be quick in order to keep every player involved and interested in the game. As such, many party games, like Mario Party and Super Monkey Ball consist of many minigames that together make up the game. There are, however, other ways of keeping gameplay short and player turnover high. Games like Dance Dance Revolution and Guitar Hero are based around music, and one gameplay takes as long as one song. The way the gameplay is kept short is not that important, as long as the player turnover can be pretty consistent during a playing period.

In order to appeal to wide audiences, party video games tend to be rather intuitive to play. Even if the controller is complicated, party game controls usually remain simple, maybe using one joystick and a button or even less. The advent of the Nintendo Wii, released in 2006[1] furthered this trend for party video games by making body motion the form of interaction with the games, but more on that later.

Again, because party games look to appeal to wide audiences, they assume that all players might not be the best. Because of this, party video games allow for players to fail without punishing them very much at all. In Mario Party, if a player fails during a minigame, they simply have to sit out the rest of that minigame until the next one starts. In Rockband, there is a "no fail mode" that allows for players to continue a song, even if they are doing poorly. Both of these gameplay rules allow for failure without much consequence, making players be okay with failing. This is in stark contrast with online multiplayer where if one player fails, he could bring the whole team down, or even with puzzle games where if the player fails, he must restart completely.

Because party games tend to be played by larger groups of people looking for an addition to their social experience, the focus of party games is mostly on simple fun. Party games aren't looking to immerse their players for extended periods of time. In fact, they look to do the exact opposite, providing players with a quick fun experience that will make them excited to try again, but also okay with letting go of to another player for a little bit. 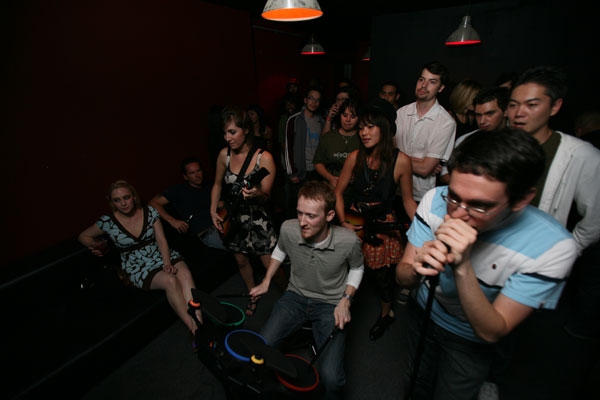 A group of people playing Rock Band at a party[2]

The Nintendo Wii was a revolutionary gaming console that when released, catered greatly towards party video games. The reason for this is because the Nintendo Wii's controller uses motion sensing, allowing players to interact in a very intuitive way, movement. The complex two-joystick controller knowledge or even any controller knowledge at all is unnecessary; almost anyone can pick up a Wii remote and start playing rather smoothly. As such, any one in a social setting could participate in Nintendo Wii games. Also, because players have to move around in order to play Wii games, they can often times provide entertainment for those who aren't playing for the moment with some ridiculous looking gestures. 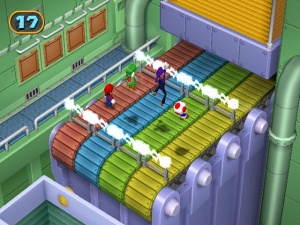 A minigame in Mario Party 7

The Mario Party series debuted in 1998 with Mario Party, an exciting party game allowing players to go head to head with many characters from the Nintendo universe. Since then, 11 more Mario Party games have been released, the most recent being Mario Party: Island Tour for the Nintendo 3DS.[3] Mario Party exhibits many of the stereotypical qualities of party video games, with gameplay consisting mainly of minigames, a board game style playing surface, and a fun representation. Players compete in these minigames with the goal of attaining coins and stars. At the end of the game (which is determined by how many turns are played), whichever player has the most stars wins. The Mario Party series has been quite successful, and as such is currently the longest-running party video game series[4]. 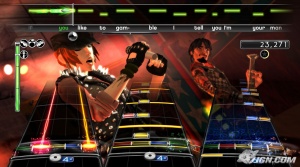 The in-game screen for Rock Band[5]

The Rockband series first started in 2007 with the release of Rockband. Like Guitar Hero, Rockband simulated playing music, and even further, being in a band. Players use plastic, instrument-shaped controllers (there is a guitar, a bass, a drum set, and a microphone) and attempt to hit "notes" correctly in order to succeed in a song. What makes Rockband more of a party game than Guitar Hero is the four-person gameplay where players can feel like they are in a band with their friends. Also, because the controller-instruments are rather simple, the gameplay is easy to understand and therefore accessible to almost anyone. All of this indicates Rockband is definitely a party video game, but it also can be more intense, as some players commit themselves to becoming skilled at Rockband, making the gameplay style more like that of a traditional video game[6]. Essentially, the game targets a broad audience, from gamers to grandmas alike. 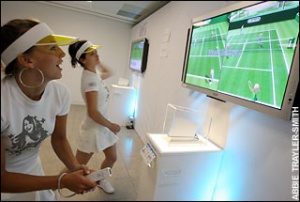 The included game along with the purchase of a Nintendo Wii system, Wii Sports impressed many as a fun, simple, exciting party video game. Wii Sports has basic graphics and gameplay that highlights the possibilities of the Wii controller. Players can play five different sports, tennis, bowling, baseball, boxing, and golf, and almost all of the controls are dictated by the motion sensor controller. Because most people are familiar with these sports, the transition to playing virtual versions on Nintedo Wii is a relatively smooth one, meaning that the game appealed to a large group of game players. This title was (and is) synonymous with the Nintendo Wii, as the simplicity of the game makes it fun and easy and accessible to almost everyone.