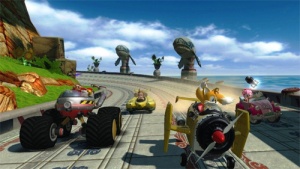 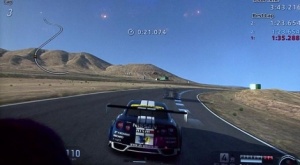 The racing video game genre of video games that provides a fun experience and/or realistic simulation of racing fantastical objects and/or vehicles. These races can occur from a first-person or third-person perspective, and can take place in land, air or water. The means of simulating a racing environment varies depending on the genre of the racing game. These genres can range from major simulators, such as the Project Gotham Racing series, to the Mariokart series. These games might also be considered Sport games. 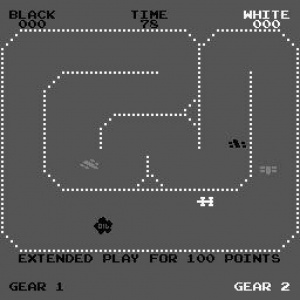 Over the past 35 years there have been over 2,400 racing games developed starting with the Atari console in 1974. Released on the 24th of July, 1974, Gran Trak 10 was released as one of the first ever racing video game. This single-player racing arcade game further tested the skills of gamers by adding various obstacles of gameplay, such as manual shifting and oil spill diversion. In order to "win" the game, the player had to accumulate as many points as possible. Points were acquired by beating the clock time set by the game - the less time a player took to complete a course the more points they earn. Once the player beat the course clock a variation of the track would occur on the next stage. Another element of realism this game added to the video game-sphere was the steering wheel. This allowed players to experience driving simulation on an entirely new level. [1][2] The gameplay was so intricate that the game's underlining program incorporated ROM (Read-Only Memory) in order to save score, timer, the race track and car images.[3]

Night Driver (1976)provided the player to experience first-person “driving”. Due to the advancement in technology, users were able to eventually experience 3-Dimensional gameplay at its infancy. Indy 500 (1977)was a game equipped with a joystick to experience the arcade effect in the comfort of one’s home. Rally-X (Namco 1980), an arcade game, originally operated on the PacMan hardware and was the first game to feature background music and a bonus stage. Turbo (Sega 1981) was the first racing game to introduce a cockpit experience during gameplay. It also provided the first usage of third-person perspective during the gameplay. Pitstop (Epyx 1983) was the first game to introduce a head-to-head split screen competition option. In addition to this there was an added element of realism in the gameplay. The players would have to pay attention to their fuel levels and tire conditions in order to know whether a pitstop was required or not.

Before 1987, home consoles did not have powerful hardware to provide the same experience as arcade games. The graphics and sound effects were rendered in a way that abstracted the gameplay, but eventually developers were able to add 3-D devices to allow for a more realistic interaction. In 1989, Atari came out with Hard Drivin’ which was the world’s first serious simulation racing game. This game included a steering wheel feedback system, clutch and shifter for the manual driving experience, and an improved graphics system with mountainous backgrounds. 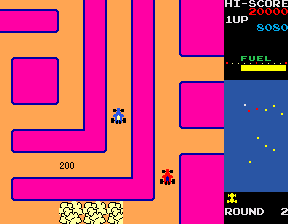 Rally-X is a maze & driving arcade game that revolutionized the way arcade games would be played and programmed. Released in 1980 by Namco this game gained major success due to how widespread distribution and accessibility. The two major industries include video arcades and amusement parks. Its program is the Namco Pac-Man hardware, and was one of the first games to incorporate a recurring object by featuring "Special Flags". In addition to featuring new objects, Rally-X also was the first game to introduce "bonus round" as a concept and one of three games that has this as an option.

The objective of the game is to direct a blue car around a maze and it is up to the player to decide which direction to move this automatic movement. As the player moves throughout the map they encounter flags that are intended to be collected in order to advance, each level has ten flags. Several red cars chase the blue one around the maze, and contact with any of them results in losing a life when hit. The number of these cars begins at three and increases in number throughout each normal round to eight. The player has a smoke screen ability to use against the red cars. Contact made with the smoke screen will momentarily stun the vehicle and time stunned decreases with advancement of every level.

Furthermore, the blue car has a limited supply of fuel, which is indicated on the right, Head-up display. In addition to this parameter there are rocks scattered throughout the map that the player must avoid, increasing in number as the game progresses.

Falling under the Sports Racing sub-genre, the Project Gotham Racing series, developed by Bizarre Creations and published by Microsoft Game Studios for the Xbox gaming console. Being one of the first Xbox launches, alongside Halo: Combat Evolved, opened up the digital world of racing simulation. PGR differs from most racing games in that winning a race does not mean the player advances to the next round; instead players must meet certain requirements and/or accumulate kudos points in order to advance to the next round: These requirements include player's driving skills.

After its world-wide release on November 15th, 2001, the first installation of PGR ranked 87.32% on GameRankings and 85/100 on Metacritic. As the game series progressed, PGR 3 was awared six world records in the Guinness World Records. These achievements include: "Most Complex Car Models in a Racing Game", "Largest Licensed Soundtrack includes in a Racing Game", and "Most Complex Race Environment".

Other racing games of this variety include: Forza Motorsports, Midnight Club, Need for Speed, and Ridge Racer series.[4] 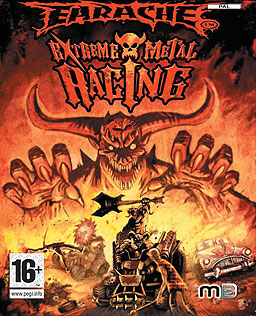 This sub-genre of racing game is one not as successful as the other racing series, such as Project Gotham Racingor Gran Turismo Racing. Even though cult racing is not widely successful, there are gaming communities whom maintain the die-hard enthusiasm for the acclaimed games. This genre derives itself from the use of unconventional characteristics. This unconventionality ranges from the cultural differences of gamers to the testing of conventional gameplay narratives. Furthermore, cult games might have difficulty appealing to a specific population of gamers. An example of a cult racing game is Earache: Extreme Metal Racing. This game successfully incorporates heavy metal music from the Earache Records record label; metal music plays as the players race through various modes of gameplay. The game modes include: single race: offers single-player, competitive action on any of the tracks; time trial: allows for the player to engage and refine their skills without being interrupted by challengers; challenge: a tournament-style series of 3 successive races with points being distributed among the finishers after each race; death match: a free-for-all death match the provides players with 3 lives each; zombie massacre: gametype designed for players to obliterate as many zombies as possible; and death race: to win, all competitors must be destroyed before they complete a lap of the track.