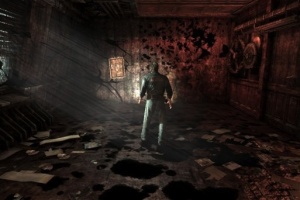 A quintessential survival-horror scene from an important game in the genre, Silent Hill.

The Survival Horror game genre is in many ways defined not by its mechanics, but rather by its emphasis on overarching thematics and tones. Several key elements of traditional Survival Horror games set them distinctly apart from games of other genres. Importantly, a central aspect in Survival Horror is the helplessness and vulnerability of the main character. By emphasizing the weakness of the character and the contrasting power of the enemy, the genre forces the player to adopt a more prey-like attitude than in most mainstream games. Through the character, horror elements are targeted at the player to cause effects similar to those in horror film: suspense, stress, and vulnerability, among others. [1]

The gameplay in Survival Horror focuses on survival of the character and the overcoming of adverse situations in which the odds are stacked against the player. There are typically limitations on the character such as speed, strength, inventory capacity, and methods of defense. Due to these limitations, the player must often rely on evasion tactics and hiding to avoid death, because enemies tend to be too powerful and/or numerous for the player to confront them. Traditional Survival Horror games usually take place in a hostile and disturbing world in which the character is isolated from any allies; thus, the games tend to be single-player. In-game strategy often revolves around puzzle solving and item collection to continue through levels, while storylines often manifest themselves retroactively in the form of diary entries, audio recordings, etc. that the player pieces together throughout the game. [2]

Foundations in Other Media 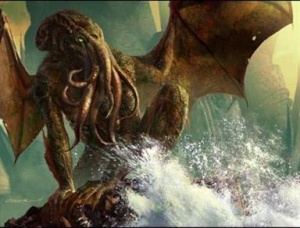 An artist's rendition of Cthulhu, one of H.P. Lovecraft's all-powerful monsters.

The Survival Horror gaming genre draws storyline themes directly from traditional horror fiction. Many of these video games are inspired by the works of American author H.P. Lovecraft, whose stories eventually defined the literary genre. Lovecraft's affinity for investigative stories and "journeys into the depths" can be clearly seen in the subsequent game genre. Similarly themed horror fiction works by author Edogawa Rampo emphasized the Japanese style of horror and also inspired later games. Western horror fiction most often relies on action and gory horror, while the Japanese tradition prefers to emphasize more to psychological horror, but both themes are present in modern-day Survival Horror games.

Horror film has equally important conventions that have transitioned to horror games. Most importantly, key elements of cinematics such as lighting, sound and camera are as characteristic of Survival Horror games as they are in horror film. Lighting in-game tends to be gloomy and dark, while the environments are typically claustrophobic and suffocating. Restricted or awkwardly incomplete camera angles also are common within the game and cutscenes. Sound, either in the form of background music, on-screen or off-screen sound, often builds suspense and provides warning cues to the player. All of these cinematic themes are designed to build suspense and maximize the possibility that enemies can lurk nearby, further highlighting the themes of vulnerability and horror. [3] 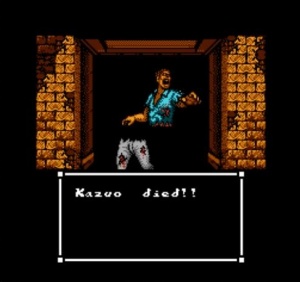 Perhaps the first Survival Horror video game was the 1982 game Haunted House, released for the Atari 2600, which incorporated many traditionally accepted elements of the genre like puzzle-solving and evasion. [4] Throughout the 80s, a series of games was released that fell under the banner of Survival Horror. However, the genre 'Survival Horror' was not defined until the 90s, so all of these games were included in the genre retroactively. At the time, they were likely considered to be Action games, of which Survival Horror came to be a sub-genre. Notable examples from this decade include the Monster Bash arcade game, Castlevania (1986), War of the Dead (1987), and Splatterhouse (1988).

The early 1990s saw a continued release of many games that would today be considered traditional Survival Horror games. Alone in the Dark (1992), Doctor Hauzer (1994), and the Clock Tower series (first installment released in 1995), among others, further propagated Survival Horror themes while increasing the genre's popularity. 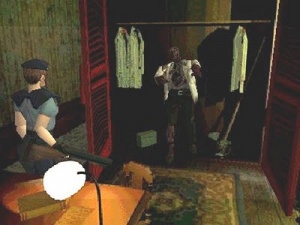 The release of Resident Evil (1996) by Capcom marked the beginning of the "Golden Age" of Survival Horror. The huge success of the game, both critically and commercially, ensured its ascent as a definitive game that first truly "Survival Horror" game. It served as a formula for many subsequent games, and its definition of the genre drew many previous games into the genre retroactively. Resident Evil was directly inspired by Sweet Home, as the game began as a remake of the older game. [6]

The continued release of horror games for the rest of the 90s was spurred by the huge success of Resident Evil, and most of these games mimicked the classic hit as much as possible. Examples include Overblood (1996), The Note (1997), Hellnight (1998), and Resident Evil 2, which was also highly critically acclaimed. In many scholars' opinions, it was not until the release of Konami's Silent Hill (1999) that the Golden Age of Survival Horror reached its climax. The game is considered by many to be the scariest game of all time; it draws heavily from aspects of Japanese psychological horror, while maintaining many traditionally Western elements of horror. [7]

2000s-Present: Departure from the Traditional Genre

Following the huge success of Survival Horror in the 1990s with the notable released of Resident Evil and Silent Hill, the 2000s saw a gradual departure from the traditionally defined Survival Horror genre. Generally, the genre began a shift away from many of the conventions of Japanese horror; instead, games tended to emphasize Western themes like visceral horror and action, the latter being the most divergent element of new games. In the case of many of the most popular releases of this time period such as The Thing (2002) and Doom 3 (2004), games began to be more appropriately considered an incorporation of horror elements into traditional shooter games.

The release of Resident Evil 4 (2005) represented the turning point for classic Survival Horror; it redefined the genre in the interest of action and shooting, as opposed to the traditional theme of helplessness and emphasis on evasive tactics. The traditional Japanese psychological horror themes present in many of the Golden Age games went out of favor during this time period and were replaced more and more frequently by traditionally Western violent horror. [8]

During and after the gradual departure of games from the Survival Horror genre throughout the 2000s, a wide range of sub-genres emerged. Beginning as a sub-genre of Action games itself, Survival Horror came to be a term too broad of a term to precisely define all of its games. 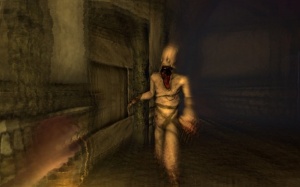 Stillshot of an enemy encounter from Amnesia: The Dark Descent.

The release and smash-hit success of Resident Evil 4 in 2005 marked the most prominent shift within the genre to what was subsequently defined as the "Action Horror" game genre. In this and many later games, there was a distinct departure from the helpless vulnerability that was crucial to the classic definition of Survival Horror to a more militant gameplay experience. Zombie Shooter games have also gained popularity over recent years and fall under into this sub-genre.

As Indie Games continue to rise in importance in the gaming world, a number of them have taken on the Survival Horror genre. Many Indie Games have brought back very traditional Survival Horror elements and disregarded the mainly shooter-centric shift that occurred throughout the 2000s. This theme is likely due in large part to the financial limitations inherent in the Indie Game genre; these games tend to emphasize horrific settings, situations and sounds rather than violence. The most prominent examples of Survival Horror Indie games are Amnesia: The Dark Descent, Slender: The Eight Pages, and the games of the Penumbra series. [10]

4. The History of Survival Horror. IGN.com

6. The Evolution of the Survival Horror Genre. IGN.com

8. How Survival Horror Evolved Itself into Extinction. destructoid.com.