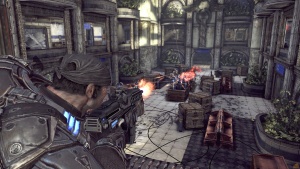 Third-person shooter (TPS) is a genre of videogames, specifically, considered a sub genre of action games. TPS games focus on shooting targets such as from non-player character (NPC) enemies, player controlled enemies, and wild animals as the primary engine of the experience. Shooting is the main feature of the game but many recent TPS offer variations to the gameplay such as minigames or vehicle combat. These videogames are characterized by the player’s perception of their avatar and game world from a camera situated behind the avatar, the human player can always see their avatar on-screen.These games are often focused on a linearly structured narrative in the form of a campaign mode, playable either cooperatively or solo. Another convention of shooters is to offer players a competitive, player versus player (PVP) component. These multiplayer modes can be used in competitive leagues, as we have seen with the popular Gears of War franchise.[1]

Third-person shooters are a product of technological advancement in the gaming industry and, therefore, were developed later in time relative to other established genres. Thus, TPS games have crafted an identity out of distinct characteristics pioneered by other genres. 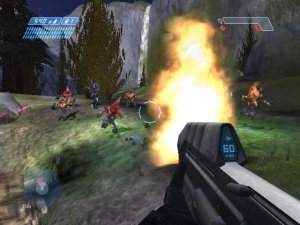 The third-person shooter is most closely related to the first-person shooter (FPS) genre. These genres are most commonly affiliated with one another due to the fact that shooting is the primary means of accomplishing the objectives[2]. In both TPS and FPS games the camera serves first as a means of easing the player’s ability to aim their weapon. In TPS games the player is given a greater freedom as to where the can direct the camera relative to the avatar while the camera is attached to the avatar’s eye line in FPS games. A noteworthy and successful first-person shooter would be Halo: Combat Evolved (2001). 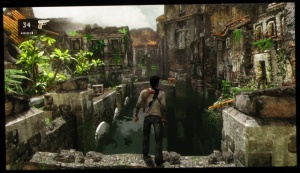 Uncharted: Drake's Fortune an adventure game that had many shooter elements

Action games are often played from a third-person perspective so as to grant the player a better idea of where the avatar is within the game world. This helps the game achieve a more cinematic touch, as a large amount of the game world is visible, which has been used in reason games. This effect is demonstrated in the popular PS3 title Uncharted: Drake's Fortune (2007). 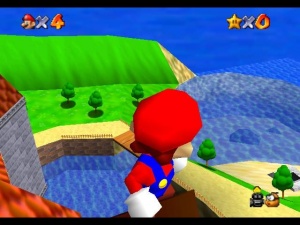 A 3D platformer uses the game space to guide an avatar through obstacles using abilities such as freerunning, climbing, and jumping. TPS games incorporate some of these actions so that the avatar can reach more areas on the map. The way in which the player perceives the game world requires a three dimensional environment so that there can be a high level of depth perception. This is important because it allows the player to better distinguish where the avatar is in the game space. This third-person perspective allows action and TPS games alike to challenge the player with obstacles that demand the player to hold a greater understanding of where their avatar is in the game space. Super Mario 64 (1996) is a famous example of a 3D platformer title that was successful in building a game around the movement capabilities of the avatar.

In TPS games the player maintains a consistent understanding of where their avatar is within the space of the game world. This allows the player to accomplish non-shooting feats that are often used in action games such as running, jumping, climbing, getting into cover, and rolling. These abilities allow the game developers to use in game obstacles that test the player’s virtual spatial awareness, much like a 3D platformer would.

A major difference between FPS and TPS games is that it is more difficult to precisely aim from the third-person perspective. In order to compensate for this, many TPS games include some for of an auto-aim or aim assist that subtly snaps the weapon reticle to opponents as long as the player is aimed within a given vicinity. Additionally, players are often given the option to zoom in, narrowing the field of view but increasing shot accuracy.[3] This motion is meant to mimic the avatar’s focus and is achieved through a zoom effect into an over the shoulder shot. The player sees their weapon reticle gets smaller which implies the narrowing of the bullet spread, the distance that shots will randomly deviate from the intended target.

The player is often afforded a considerable amount of freedom as to where the camera is aimed in relation to their avatar. In many recent TPS titles the player can circle 360 degrees around their avatar. This is an important feature of high budget, AAA titles that thrive on spectacle - achieved through expansive environments and dynamic in-game events for the player to observe. Because the camera is relatively free to move, TPS games are a good genre to showoff cinematics in games. 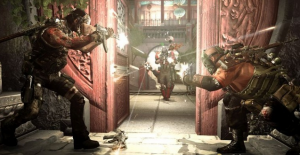 The Third-person shooter genre exhibits many advantages over other genres that many players favor. These include the visible characters, visible actions (crouching, prone, jumping, climbing, and more), generally a wider field of view, and close up objects are portrayed more realistically then they would be in the FPS genre.[4] In fact, many gamers prefer the third person point of view. Ryan Lambie, an author for DenofGeek.com, states, "Somehow, the third-person shooter has always seemed to me like the more playable, accessible genre. With your protagonist before you on the screen, you’re provided with a focal point around which all the events in the game take place. You can see precisely where your alter-ego is in relation to all the enemies and obstacles are in the environment. Climbing ladders and leaping chasms, tasks frequently made fiddly and unreliable by a first-person perspective, becomes a far more simple affair in third-person."[5] Lambie makes the case that the third-person view is actually superior to that of the first-person view, but he notes that this is indeed a matter of opinion. This enhance spatial perception over FPS games allows TPS games to incorporate more challenges of spatial awareness (similar to those seen in platformers) that vary gameplay from monotonous shooting. 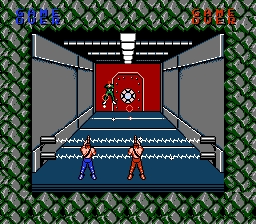 The third-person shooter genre first came from Japanese game developers in the late 1970’s. Nintendo was among the first to pioneer the genre through space shoot ‘em up games. Sega was another early adopter of the third person model but it was Konami that had the greatest impact on the evolution of the genre. Konami released Contra (1987) which honed the synthesis of side-scrolling run-and-guns and third-person shooters. Devastators (1988) was released a year later in a true third-person style and offered two-player cooperative gameplay as well as an early cover system [6]. 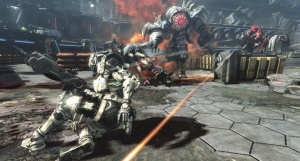 The action/adventure game Tomb Raider (1996) includes many third-person conventions. Tomb Raider is important in that it established the practicality of the third-person point of view for combat, platformer challenges, and revealing the aesthetics of the game world. Max Payne (2001) blended elements of bullet time combat and platformer puzzle solving to craft an innovative third-person shooting game. Vanquish (2010) was important to the genre because it integrated many innovations such as destructible cover, fast-paced gameplay, and bullet hell elements. Army of Two from Electronic Arts is a third-person shooter series that succeeded in integrating cooperative gameplay into the genre. The first two installments Army of Two[7][8] and Army of Two: The 40th Day[9] were well received by the gaming community and heralded for their cooperative features. Eponymous with the title, Army of Two follows two mercenaries through various battlegrounds and affords the player a wide range of armor and weapon upgrades to brutally defeat scores of AI enemies. 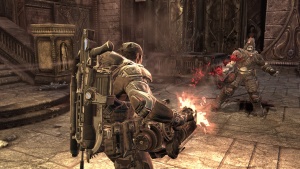 Gears of War (2006) was released exclusively on the Microsoft's Xbox 360 from game designer Cliff Bleszinsky and the development team at Epic Games. Gears of War is an action-intensive third-person shooter that pits players through a slew of sci-fi battlefields. The game was received exceptionally well both commercially and critically.[10] Gears of War exhibited some of the most refined gameplay mechanics, like aiming, blind firing, and covering, that the genre has ever experienced since its inception.[11] Gears of War is important to the success of the genre as a whole because it was so well received by the gaming community at the time of the release of the Wii, PS3 and Xbox 360 so it gained a lot of positive media attention. In keeping with industry trends, Microsoft held on the exclusivity rights and made a lucrative franchise out of the initial intellectual property (IP). These include Gears of War 2 (2008), Gears of War 3 (2011), and Gears of War: Judgment (2013). Microsoft recently acquired the rights to the Gears of War franchise from Epic games with the intention of making more installments of the series[12].

Third-person shooter games offer an educational value in terms of developing players problem solving skills. This is achieved through the players attempts at overcoming in game puzzles and defeating the varying challenges with strategy. According to the American Psychological Association, playing violent videogames can help develop learning ability, social skills, and overall health[13]. It is also noted that shooters aid in boosting cognitive skills like spatial navigation, memory, and reasoning. TPS games can also aid in developing hand-eye coordination through the use of a hand operated controller guiding the actions transgressing on the screen.

Third-person shooters are an inherently violent genre. Many titles (including Gears of War and Army of Two) have received 'M' (mature) ratings from the Entertainment Software Rating Board (ESRB) indicating that they are intended on for audiences ages 18 and above. This is due their violent nature - often accompanied by alcohol & tobacco use, partial nudity, strong language, crude humor, blood and gore. Third-person shooters (Gears of War specifically) are very much a part of the on going American political debate about videogames causing violent actions in players.[14]

The combination of platformer, action, and shooter elements makes third-person shooters an attractive platform for developers to create a wide array of games around the model. Whether it is an ambitious, open-world console role playing game (RPG) like The Division (2014)[15] or a simple mobile shooter like Frontline Commando (2011)[16]. This indicates that the third-person shooter model is easily adapted to suit the needs of a wide stylistic range of developers. This is particularly important in contemporary games that want to show off the technological and resolution capabilities of their engines.

Relative to game genres like first-person shooters, which have had a large presence in the e-sports circuit, third-person shooters have not been particularly popular. The exception to this would have to be the first two installments of Gears of War. Gears of War and Gears of War 2 were exciting additions to the MLG Pro Circuit's console repertoire[17] but have since lost momentum due to a lack of investment and promotion by the MLG. Gears of War is also considered to not be a spectator friendly series and thus led to it being replaced by games like Call of Duty: Black Ops 2 and League of Legends.