Rigging is the process of creating guides for movement in 3D objects. It has its basis in hierarchical relationships between different movements in a human skeleton. What a rig does is define the way the various parts of a model will move in relation to the other parts of a model. Thus rigs are essential constraints to the types of movements different parts of a model can perform. To accomplish this functionality rigs have a highly complex system of hierarchical relationships. Inverse Kinematic target bones guide the bones around them by causing the bones following them to produce the opposite transformations the animator applies to them. Having this capability means that a good rig can be animated using only the target bones to produce movements that without a rig would be highly complex and time consuming.

The original purpose of rigs was to allow animators to model animal movements in a more efficient manner. Hence one of the most common reasons to learn how to rig models is so that a person can animate a human skeleton. Human rigs vary in complexity which is proportional to the complexity of the movements required by the animator. Indeed when making a rig it is good practice to minimize complexity. This requires a thorough examination of what is necessary for the animation. There are however uses for rigs other than for animating animals. Rigs are useful in any situation where the mesh itself will be animated. As opposed to the object. Hence many engineering models and physical models use rigs.

This guide should give a slightly more practical lesson on the use of armatures. This guide assumes that you understand the process and terminology of the previous guide.

This tutorial is just an expansion of the previous tutorial. It will give the user a basic sense of how you make a human. From this point it should be fairly easy to move on to external tutorials which will provide more useful meshes and armatures to work with. 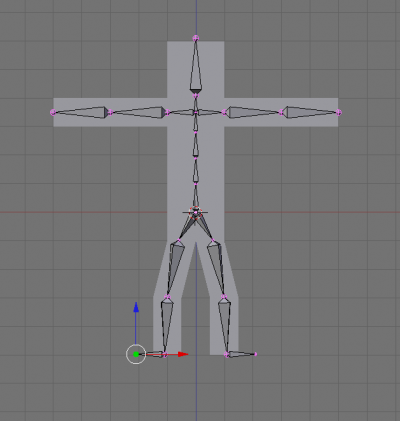 For a complete guide at human modeling follow this link to Blender Summer Of Documentation character animation tutorial.