What is transparency and Shading

Shading defines the way a mesh with a texture receives light. There are many different types of shading. Primarily Blender uses raytracing. Raytracing is a highly CPU intensive form of rendering. At the same time as being intensive it also provides the most high quality renders. Other common forms of rendering include diffuse shading which spreads the light in a uniform manner over a texture or toon shading which shades cells of an object relative to a lightsource. Shading is the primary means of making a 3D data structure look 3D to the eye.

Alpha determines the amount of color or a mesh receives. The highest alpha is 100% saturation 0 alpha is 0% saturation.

Reflection determines how much light a texture reflects.

Specularity determines how much point light will reflect off the surface closest to the light source.

Emit is the percentage of light received that all surfaces of the object will give off.

This menu allows the user to create a reflection of the surrounding environment off of the surface.

This menu allows a user to create transparent objects like glass. 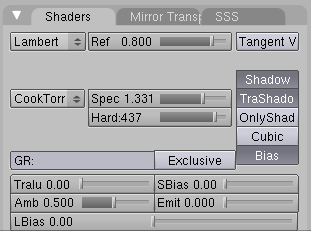 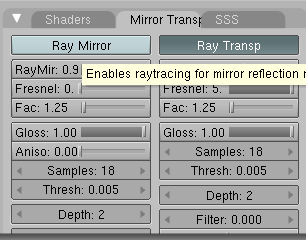