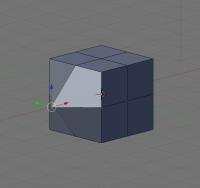 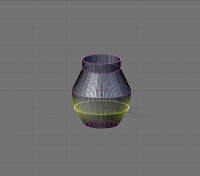 
To scale the user must press s. This scales in relation to the user's perspective. To define a direction of scaling the user can press x,y or z. Pressing control will constrain the scaling procedure to the grid. Scaling in object mode defines the object as being larger than the value of its vertices. That is it performs a uniform resizing on all of the objects vertices. In edit mode resizing scales the actual position of the vertices in relation to the control point of the object.

Extrusion is a way of expanding an object by actually adding geometry. Extrusion takes a vertex and duplicates it while preserving its connection to the parent vertex. Thus extruding a single vertex will create an edge connecting the two vertices. Extruding an edge will create a face between the old and new edges. Finally extruding a face will create faces connecting the peripheral edges of that face to its original location. Extrusion is powerful because it adds geometry. Because it is an additive process it does not cause deformation of the preexisting geometry.
Extrusion can be accomplished by selecting a vertex, edge or face and then pressing e. As with grabbing and scaling pressing x,y or z will constrain the extrusion along these axes.

Often in order to manipulate a 3D object the user will want to add extra vertices to an object so that it is easier to control. For instance it may be necessary to add a ring of vertices at the center of an object so that it can be scaled to be wider in the middle. In order to do this the modeler must create vertices at the necessary points on the mesh. When doing this an animator must consider the computational resources which must be devoted to adding vertices and then balance these with the boost of realism the model will receive. With this in mind there are two ways that a user can add vertices.

Loop cutting adds vertices in a ring around the model. By pressing k and then left clicking a ring will appear around the object. This ring will create a vertex at every edge it intersects. Thus new vertices will be added.
Subdivide subdividing splits the selected edge or face in half. This gives the user the ability to add geometry to an object. By selecting an edge or face then pressing control-w the surface will be subdivided.

The choice between these two options is depends entirely upon which one can accomplish the goal while creating the fewest vertices.