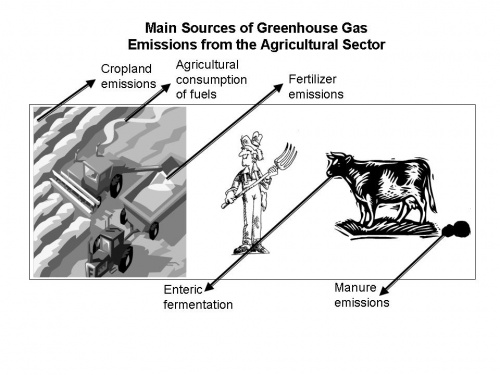 It may seem self-evident that agricultural practices negatively impact the delicate balance of our environment. Surprisingly, awareness regarding greenhouse gas emissions from the agricultural sector arose only recently. Literature on climate change and agriculture was limited to adaptation and not mitigation measures, up until the early 1990s.[6] [7] Therefore, measures to mitigate or reduce the effects of this sector on global warming have been only recently conceived and seriously considered.

In spite of this being a relatively new field, the potential for reducing agriculture stands at a significant figure of 5500-6000 megatons CO2-eq. per year by the year 2030.[8] This is approximately comparable to the potential of the entire transportation mitigation sector.[9] Improving agricultural management with respect to mitigation of greenhouse gases, involves the implementation of practices that aim to make the land more able to sequester carbon dioxide and to reduce greenhouse gas emissions. Improved agricultural management includes practices such as better cropland management, grazing land management, livestock management, manure management, reduction in the use of carbon fuels for agricultural purposes and agroforestry.[10]

Much of the contemporary scientific community believes that mitigation in the agricultural sector is a very challenging process. Some scientists believe that improved agricultural management is not worth the effort and investment when compared to other more achievable mitigation projects such as harvesting wind energy or solar energy. Others suggest that improved agricultural management can increase the land’s ability to sequester carbon and therefore offset other emissions from the sector to a great extent.[11]

NOTE: The potential success of mitigation efforts depends highly upon local factors and thus may succeed better in some regions and not as well in others due to differences in the climate, soil type and the current farming practices. Secondly, 90% of the total mitigation potential from the agricultural sector comes from increasing sequestration. This is achieved by the enhancement of carbon sinks. The other 10% of the mitigation potential comes from the actual reduction of greenhouse gas emissions.[12]

Here are some of the more important options of mitigation in the agricultural sector:

The main emission from croplands, and the most significant contributor of emissions in the agricultural sector, is Nitrous oxide. Nitrous oxide is naturally emitted through the processes of nitrification and denitrification of the soil. Nitrogen-based fertilizers also can contribute to an increase in emissions. Since all the content of the fertilizer may not be consumed by the crop, the remaining is thus emitted into the atmosphere. The manner in which the soil is tilled, irrigated and drained also has an impact on the emissions of Nitrous oxide, soil carbon and fossil fuel carbon dioxide emission.[13]

Options for mitigation include the use of more efficient nitrogen-based fertilizers or switching over to other non-emitting fertilizers. They also includes improved tillage and residue management (for example, the no-tillage cultivation practices in Denmark)[14] and improved water management. These measures are scientifically proven to help the organic soil retain its nitrogen, carbon and fossil fuel carbon dioxide content without emitting it into the atmosphere.[15] [16]

Such practices also improve the quality of the soil in such a manner that it may begin to sequester carbon dioxide directly from the atmosphere, under the right conditions.[17]

The livestock kept by the agricultural sector play a large role in the emissions of methane. Methane is naturally produced by microbes in the enteric system of ruminant animals like cattle, buffalo, sheep, goats and camels during digestion by the process of fermentation. The methane is eructated by the livestock.[18]

Livestock emissions can be reduced by employing various techniques. Firstly, the quality of the feed for the livestock may be improved with the aim of reducing its ability to ferment and produce methane. Secondly, employing the use of biological technology will reduce the livestock’s enteric system’s ability to emit methane. Thirdly, by increasing the livestock’s per unit output of agricultural products (milk, meat and work), the requirement for livestock will numerically grow slower than previously expected.[19] Hence, the total methane emissions would be reduced at a national level.[20]

The most effective manner to manage agricultural manure is the use of an anaerobic digester. Aerobic digestion is a process where manure is digested in a tank to produce biogas; a renewable source of energy. Some of these digesters are already in use to improve the sanitary conditions at farms as well as control the odor. Digesters are therefore useful in capturing the methane emitted by manure, and oftentimes useful as a renewable source of energy.[22]

Rice is mostly grown in flooded paddy fields throughout the world and especially in Asia where 90% of the world's rice is grown. Once the oxygen content of the soil and the floodwater depletes due to aerobic decomposition, anaerobic decomposition begins and methane is produced.[23] [24]

Methane production in rice farms can be reduced through better water management so as to maintain oxygen supply in the water. Also, special fertilizers may be used which prevent the anaerobic process from occurring. Lastly, farmers may give up the flooded paddy method of growing rice and switch to upland farming of rice which does not use as much water and thus anaerobic respiration is negligible.[25]

Other solutions include agroforestry, grazing-land management and the reduction in the use of carbon fuels for agricultural purposes. These do not have as much mitigation potential as the other solutions mentioned.

Agroforestry refers to the practice where woody plants are planted alongside crops for improvement in soil quality for sequestration as well as economic benefits to the farmer from the produce of the woody plants.[26]

Grazing-land management refers to the practice where the quality of the grass is improved, the animals graze in sections and other related practices are employed. This is for the purpose of minimizing the use of land for these practices and improving their efficiency. Such practices have been employed in Ethiopia. This would reduce the required land for agriculture and hence help to mitigate agricultural emissions.[27]

Carbon fuels are used commonly in agricultural practices so as to run utilities such as tractors and mills. Switching to biofuels for these purposes is a manner in which carbon fuel emissions may be mitigated.[28]

The Scales of Change: the different social levels at which change must be implemented

Thus, at the end of the day, it is centrally the individual who will carry forward these changes towards agricultural management. This involves a change in the traditional manner in which these individuals run their farms. Farmers may also need to make investments into the new technology. Hence, they require incentive to carry out such changes. Compelling but not frightening knowledge regarding the urgency of the climate crisis and the impact of irresponsible agricultural practices on the environment can be one incentive to switch over to more responsible practices on an individual level.[30]

Such incentive can also come from the local community in which an individual lives. One farmer can see his neighbors changing practices in order to mitigate greenhouse gas emissions and therefore may be pressurized into making such changes himself. New social norms may be established by "illustrating them, living them, and communicating them in any possible way so that audiences recognize them as appropriate and the new normal. As these new social norms become widely acknowledged and internalized, people will be motivated not only by external pressures or incentives, but also, and more reliably, by their innermost values and beliefs."[31]

The climate change crisis can have an immense impact on the agricultural sector as well. For example, a 2°C increase in temperature due to global warming can cause the wheat yields in northern India to reduce by 28% to 68% (if the carbon fertilizer effect is not considered in the predictions.)[32] Hence, community-based awareness regarding climate change issues can motivate the local community to act.

The Political, Economic and Socio-Cultural Opportunities and Challenges of Agricultural Management

The Government's attention towards agricultural management comes at the cost of lower prioritization to other mitigation sectors. The mitigation potential of this sector is substantial, though success in this sector depends on widespread involvement from much of the developing world.[37] The political cooperation and aid from the developed world to the developing world is thus necessary, in the form of sharing knowledge and technology. It requires governments to be actively engaged in policy regarding agricultural management. In some cases, the governments may need to assist its citizens through subsidies and the expansion of imports.

A challenge here is that the governments may not be interested in such investment as they would have little to gain in the short term. At the same time, international pressure can be a useful political tool for countries to adopt plans such as agricultural mitigation. Foreign governments, through their diplomatic ties as well as international agencies like the United Nations can lobby for particular plans and help spread agricultural management through diplomatic means.

"Economic and Cultural obstacles (eg., development of sufficient market demand, convincing farmers to switch farming practices) must be overcome."[38] Sufficient market demand can be created by stimulus of this sector in the global market. Considering that the agricultural sector plays a big role in the world economy, any shifts in the nature of agricultural practices would most definitely affect the economy. The outcome of such effects can be unpredictable thus national economies need to be prepared to support and sustain the change in agricultural practices.

"Farmers' expectations of future market conditions for inputs and outputs affect current planning and production decisions. Expectations about climate, other environmental conditions such as water and soil, and government policies also are part of the decision-making framework...For farming as a whole, however, prices and output are interdependent".[39] This depicts the dependence of farmers on stable agricultural markets. It also shows that these markets can make way for a different form of decision-making which factors in agricultural management and yet not necessarily have a negative impact on the farmers.

Changing traditional agricultural practices is often difficult and could pose itself as a large potential challenge within this sector. The Villui Sakha community from North Eastern Siberia were living in a natural environment which was changing drastically due to global warming. Yet, many of the Elders were reluctant to change their traditional agricultural practices until they were forced to due to flooding.[40] Educating the local population on the long-term benefits of adopting such plans is fundamental. They must know how global warming can force them to change their daily agricultural practices and livelihood. Socio-cultural norms may be shifted steadily by political and economic motivation also.

Additionally, there are underlying moral issues connected to improved agricultural management. These include the debatable unethical treatment of livestock with biological technology or the ethics of advocating the abandonment of age-old agricultural techniques of local communities. Policy-makers must be mindful of such values and ethics before suggesting or implementing changes in agricultural practices.

Agricultural management has substantial mitigation potential. The various methods with which agricultural management may be employed have been described. The social levels at which the necessary changes may be implemented have also been highlighted. But, in order for this mitigation potential to be transformed into the actual mitigation practices on a wide and effective scale, many obstacles have to be overcome. These challenges come from the political, economic and socio-cultural spheres of life.

To conclude- Is agricultural management a viable and potentially effective tool for mitigation? The answer depends distinctly on the determination and resolve of today's international community as a whole.