Carbon capture and storage (CCS) is the simple idea that a large part of the CO2 that humans produce through the burning of fossil fuels can be trapped and pumped underground into cavities that will hold it there for hundreds of thousands of years. According to the IPCC, by 2050 21% to 45% of all human CO2 emissions could be captured [1]. The foremost reason that CCS is considered intrinsic in most models of global warming mitigation is simple — coal. With China building two new coal-fired power plants a week [2] and the United States’ continued dependence on coal, sequestration is one of few ways to offset the emissions from those plants. CCS is by no means a perfect solution, and a moratorium on coal-fired power plants would be much better in the short and long term. Barring that, however, CCS is an option that is being heavily considered. The technologies needed to do this are in various stages of implementation and development. Some exist already, and more efficient and environmentally friendly methods show promise in development. 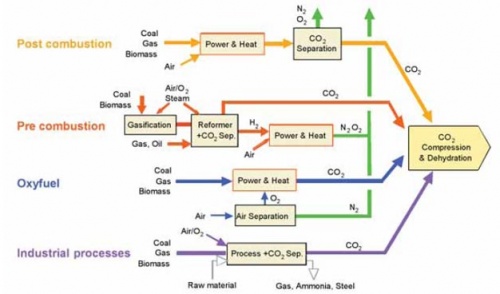 Three different technologies exist for the initial capture of carbon. The first of these — and the method that would be applied to conventional power plants — is post-combustion capture. This method is already used in other industrial contexts, and the technology is well understood. In post-combustion capture, CO2 is separated from other gases after the combustion of the fossil fuel. The second method of CO2 capture is pre-combustion, which is widely applicable to the production of fertilizer, as well as chemical and gaseous fuel. In this method of capture, the fossil fuel is partly oxidized, resulting in H2 and CO2 gasses [1]. The H2 can be used for energy production while the CO2 is siphoned off. The third method of storage is oxy-fuel combustion, in which fuel is burned in oxygen instead of air. The result of this is a mixture of CO2 and water vapor in heated gaseous form. As the cool, the water vapor condenses first, leaving an almost pure stream of CO2 that can be sequestered [3].

The main components of CCS are capture (methods discussed in the previous paragraph), transport and storage. Before it can be pumped underground, the carbon must first be trapped at the source of production, then transported from that source, and finally sequestered underground. The transportation of CO2 is usually done through pipelines because it is cheapest [4]. Currently, CO2 pipelines are used to transport CO2 to older oil fields, where it is injected into the oil field to pressurize any extra oil present to the surface. This practice is called "Enhance Oil Recovery," or EOR [5]. In most cases, the technology for CO2 capture, transport, and sequestration already exists, and in some cases is already in place for other means, such as the EOR method discussed above.

The most discussed form of sequestration — and the one best understood today — is geological storage, or geo-sequestration. In geo-sequestration, CO2 piped in from large point sources is injected directly underground into geological formations. At this point, the CO2 is generally in supercritical form, which means that it is highly condensed and acts as a liquid. The sites proposed thus far for sequestration are old gas and oil fields, un-mineable coal seams, and saline formations. The reason that old gas and oil fields are promising is because natural gasses could pool in those formations only because they form a trap of sorts. As most natural gasses have been stored in these geological formations for tens of millions of years, they are relatively reliable and permanent holding tanks for CO2. Another reason that the use of old gas and oil fields for sequestration is attractive is that the cost of storage can be offset by the extraction of additional oil that is recovered. Also, humans have been addicted to fossil fuels for a long enough time to have very good geological knowledge of the placement and relative safety of oil wells [6].

CO2 can also be injected into coal seams that are un-mineable usually for issues of feasibility. CO2 binds very durably with coal, and therefore is a safe method of sequestration. The process of CO2 absorption into coal also releases methane gas, which, like EOR, can be used to offset the costs of sequestration [7]. Of course, while the oil gained from injecting CO2 into old oil fields, and the methane gained from CO2’s injection into coal can be used to pay for the expensive technology involved, it only continues the cycle of reliance on fossil fuels. It also will reduce the net sequestration of CO2 from the atmosphere. The third group of formations proposed as sequestration sites are saline aquifers, which are large - and commonly occurring - underground aquifers holding salt brine that has to this point been deemed worthless. A benefit of saline aquifers is that they are much more common than spent oil fields, and therefore would greatly reduce the cost of transport from the point source. In contrast to oil fields, little is known about the geology of these aquifers, making it risky to use them as sequestration sites for a harmful substance. Without further geological surveying, the risk of leakage back into the atmosphere is much higher in this case than in the other two. There is also no energy payback — as there is in EOR and methane production from coal seams — which makes this option less attractive from an economic perspective [7].

Other than geo-sequestration, the second most discussed form of CCS is ocean storage. If CO2 is pumped far enough below the surface of the ocean, estimated around a depth greater than 1000 meters, the circulation of sea water is so slow that it will make the method equivalent to permanent sequestration. However, the effects that this would have on ocean life, not to mention the overall health and circulation of our oceans, is poorly understood. What is known is that the effects would almost certainly be entirely negative. Without further research, ocean storage is deemed as potentially very dangerous, as so much relies on ocean currents and life. [1].

A third method of CCS is mineral storage. In this method CO2 is made to react exothermically with certain minerals, which in turn forms stable carbonates. This process has been occurring for millions of years in the formation of limestone, for example. To speed the process up to an acceptable time table would require additional energy [1]. Both mineral storage and ocean storage are considered to be more expensive options, and less is known about their foreseen success rate and negative effects than is known about geo-sequestration. 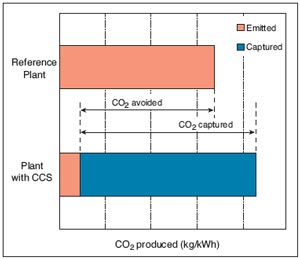 The costs associated with CCS are high. The IPCC estimates that electricity costs would be raised 25% to 50%, but there is still much uncertainty [1]. The costs could be much greater than that. In its present state of development, the implementation of capture and storage technology would raise the energy use of a common coal-fired power plant 10% to 40% to create the same amount of electricity, and the emissions (now sequestered) would also rise. However, with the future trend towards carbon taxes and permits, the implementation of CCS could soon become cost effective [4]. The greatest cost and energy expenditure is associated with the capture and compression of CO2. The cost of transportation and physical sequestration depends heavily on the location of the point source, the distance the compressed CO2 must be transported, and the nature of the sequestration.

Power plants using only post-combustion technology, and with no compensation money from oil or methane, accrue an extra cost of .02-.05 US$/Kilowatt hour (kWh). For power plants with pre combustion capture, the extra cost of CCS is .01-.03 US$/kWh [1]. If energy compensations are made through the use of oil or methane, the extra cost can be reduced by .01-.02 US$/kWh. The average American household in 2006 used 920 kWh of electricity, at an average price of 10.40 cents/kWh [8]. Based on this data, the extra costs could be a 0% price increase for some pre-combustion sites with compensation, and up to almost 50% price increase for post-combustion technology with no compensation. The largest cost reductions are seen in coal-fired power plants, where the most CO2 is emitted. There are many variables in this equation, which is the reason why the cost ranges are so wide. For example, the least cost is associated with plants where CO2 is already separated from other gasses, such as in hydrogen production.

As is the case with all major global warming mitigation strategies, CCS cannot succeed in any form without governmental funding. The budget for research and developement of mitigation strategies has been on the rise in most developed nations since at least the late 1990s. For example, the United State's research and developement budget has grown from less than 1 million US dollars in the late 1990s to close to 63 million in 2005. However, in the areas - primarily Norway, Canada, and the Netherlands - where CCS systems are beginning to be put into place, the percent of the GDP allotted is higher than in the US. Also important in terms of government funding is how heavily individual nations rely on fuels with high carbon emissions. CCS could be a more important issue in nations that have large fossil fuel and/or coal extraction economies, because those economies rely on the continued use of fossil fuels - which CCS could allow for. This is possibly why the United States has put more money into CCS developement than some other, more sustainable, mitigation strategies [9]. The political stance on CCS thus far has been influenced heavily by economic feasibility, as well as the proposed long-term benefits on economies that are addicted to fossil fuels. On the whole, the budgets for global warming mitigation will likely increase in the coming years, as global warming becomes more dominant of an issue in the minds of voters and policy makers.

There are a number of disadvantages and uncertainties surrounding CCS that influence its effectiveness in the overall scheme of global warming mitigation. The main technical concern is the possibility of leakage of CO2 from storage sites or transportation pipelines — or even more devastating, a “burp” of CO2 from a storage site that has been amassed over a long time. This is obviously a grave issue, since the implementation of CCS requires an increase in energy and emissions output, it would only serve to increase the rate of CO2 emission if storage failed [10].

Apart from the technical uncertainties surrounding CCS, it must also be acknowledged that as a solution, it is only temporary. The idea of CCS follows in the footsteps of fossil fuel use — that is, using a resource as fast as possible until it is depleted. Would CCS lessen humanity’s addiction to fossil fuels? No, and there is even the possibility that if implemented alone, CCS could make people once again complacent about climate change. If it is going to be a useful tool in the fight against global warming, CCS can only be used as a technology to slow down carbon emissions, giving time for societies to reduce their dependence on fossil fuels. In this capacity it can possibly be a very powerful method of mitigation.

In September 2008, a new carbon storage plant went on line in Spremberg, Germany. The plant uses the oxyfuel approach, in which "combustion in the resulting oxygen-rich atmosphere produces a waste stream of carbon dioxide and water vapor, three-quarters of which is recycled back into the boiler. [11]."