Hydropower is a step that can be taken into consideration for the transit into the clean energy future because it is an efficient, clean energy source. Using hydropower rather than fossil fuels will alleviate the effects of climate change in the future. The procedure to produce energy does not negatively impact the air, nor the water.

Hydropower is energy created by capturing the kinetic energy of channeled and harnessed water. The amount of energy created is determined by the flow and/or the fall of moving water. The energy is created through a simple process in which the water flows through pipes, which then pushes against turbines to spin generators in which electricity is produced. [1] Dams are storage systems water used to create hydropower, and can release water when there is a high demand for electricity. The dams help with irrigation but create some problems for natural habitats, such as those of the fish.

If hydropower were eliminated on a global scale, replacing the energy production with thermal resources would add an additional 1112 million tons of coal, 4449 million barrels of oil, or 26,696 billion feet cubed of natural gases to current fossil fuel usage. [2]

An Impoundment plant is the most common type of hydroelectric power plants. This system of a larger hydropower plant requires a dam to store a river in a reservoir. Water is controlled and released to meet the electricity needs or to maintain reservoir levels. Electricity is produced when water is released, allowing water to flow through a turbine, which then spins the turbine, activating a generator that produced the electricity needed. [5] 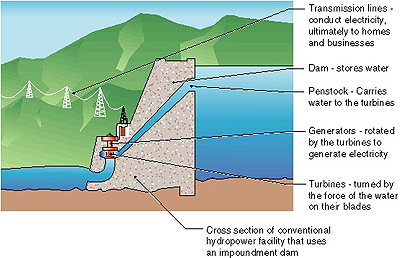 Diversion, also known as "run-of-water" system is another type of hydropower plant. It may or may not require a dam in the process of producing electricity, but it channels river through a canal or penstock. [6] 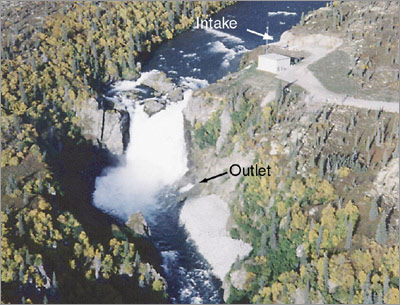 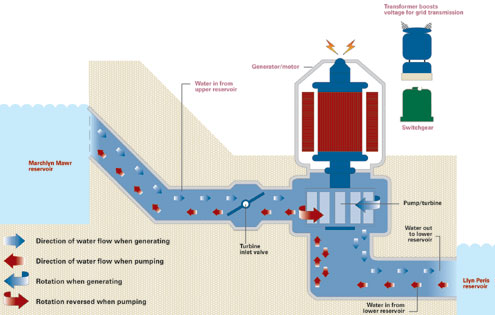 Tidal power is generated through the earth's relationship with the moon, and the earth's rotation. Water sources are one of the most renewable sources available. With the earth's surface covered by about 70% of body water, renewable energy is possible. By harnessing the kinetic movement of tidal power, electricity can be produced. [8] The technological system is built underwater, noiseless, with zero emission. Because this form of energy production requires no dams, this enables little to no impact on the environment and ecosystem. [9] 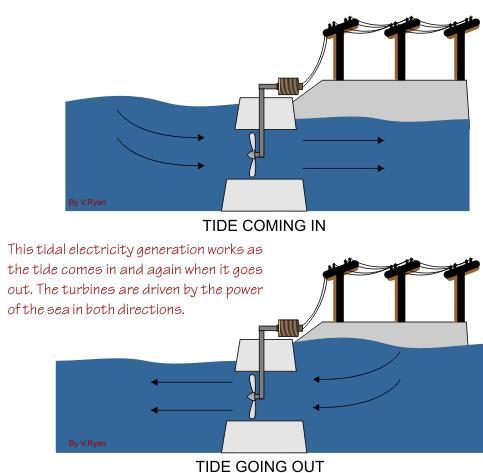 The amount of energy captured from wave power depends on the surface waves, or directly from pressure fluctuations below the surface. This type of hydropower depends on wind. As wind blows above the surface of the ocean, waves are created. It is difficult to meet the supply and demand needs for wave power, simply due to the fact that waves are not constant. Parts of the world that would provide efficient wave powered energy is eastern coasts of Scotland, northern Canada, southern Africa, Australia, and the northwestern coasts of the United States. [10] Technologies such as wave power are not properly funded because investors are not confident in investing in these technologies.

The water wheel is the oldest form of hydropower in which energy is produced by flowing/ falling water.

Many people are discouraged by the initial cost to build plants for renewable energy. The coasts are very expensive. The economic barriers stopping the construction of such projects, include load requirements, runoff, head, development cost, operating cost, value of output, alternative methods of generation, flood control, navigation, rights of other industries on the stream (such as fishing and lumbering), and national defense. [11] "The costs of the project are divided into two categories: investment and annual costs. Investment costs include civil costs, electro-mechanical equipment, power transmission line, and other indirect costs. Annual costs include the depreciation of equipment, operating and maintenance, and replacement costs. The income of the project is based solely on the sale of electrical energy." [12] Renewable energy plants are more expensive to build and operate than natural gas and coal plants. Hydropower plants are usually located in rural areas were there are flowing rivers and falls. The power is easily available in these remote areas. When it comes to the populated cities, transportation of the renewable hydropower electricity is more difficult. Transmission lines are required to deliver the power necessary. However, investing in hydropower plants can become very useful in the long run. Generating and producing the power from hydropower is very cheap. The short-term coasts into creating the plants are expensive, but money will be saved in long-term. [13]

There are some risks involved with developing hydropower plants. Due to the effects of global warming, some weather patterns are already beginning to alter. The change in precipitation pattern posses a great threat to any projects. Decreased stream and river flows can threaten energy resources. Not only will hydropower be effected, but also will in nuclear energy production. Some areas of the world may see an increase in annual rainfall, while other regions may experience a decrease in precipitation. The effects of altered precipitation include a diminished water supply, decrease in water quality, and greater flood risk as well as droughts. Society at large is hesitant to build newer hydropower plants because of the environmental threats, as well as the climate change itself shifting with precipitation patters. [15] The creation of electricity through hydropower is cheap, once the infrastructure is in place. But if water becomes scarce in areas were they once flourished, then the prices might drastically increase. Currently, the world's population is exponentially growing. The water demand to supply water for everyone will also increase as population grows, even though the availability of clean water will become scarce.

Harnessing power from hydropower plants is very clean energy efficient. The only "side effect" to hydropower projects are the negative impact on the river ecosystem. For example, the salmon population are heavily effected by the plants.＂The primary anthropogenic threats to salmon persistence are often referred to as the “four H's,” in reference to habitat degradation, harvest of fish, hatchery releases, and hydropower projects.” [16]  The population of fish can have a critical impact by these hydropower technologies. The problem lies in their ability to migrate upstream past the impoundment dams to their spawning grounds; or downstream to the ocean. Even as the fish move past turbines, they can be seriously injured or killed. With human created technologies, the habitats can change by developing systems such as fish ladders or elevators, or by trapping and hauling the fish upstream by truck. Maybe somethings can be sacrificed for the better good. [17]