As the world discusses possible topics about new energy development and substitutions for coal and oil, the topic of nuclear power comes into conversation. Analysis of current energy usage worldwide and concern for global warming reveals a challenge for current and future energy consumers: Implement nuclear power usage because of its non production of CO2 in a movement to mitigate global warming or continue using Coal and Oil plants because of our current dependence and because of our current technology and its dependence on coal and oil. Nuclear power is a technology where energy is harvested from the atomic nuclei by controlled nuclear reactions. As of today about 15% of the world’s electricity is supplied by nuclear power.[1] Currently there are about 439 nuclear power reactors in operation in 31 countries and about 83 more nuclear power reactors in construction.[1] 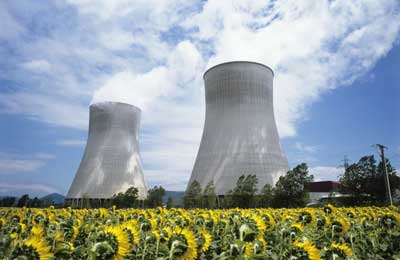 In 1934, Enrico Fermi became first to experiment with nuclear fission when he allowed atoms to penetrate Uranium atoms and observed its release of energy. On December 2, 1942, the first created man-made nuclear power plant was created in Chicago as an experiment for the U.S government to research nuclear power alternatives although many of its first uses where for the creation of nuclear weapons like the two atomic bombs that where dropped on Hiroshima and Nagasaki, Japan during World War II.

When creating nuclear energy one must first realize that each element found on earth is comprised of at least one nucleus located within its atom. Whenever changes occur to the atom that allows alteration of its current state it becomes known as a nuclear reaction. The energy that is produced because of this reaction is known as both atomic energy and nuclear energy. Nuclear energy is not only produced by man and its technologies but can also be created naturally with its best example being the sun and stars that produce light and heat from nuclear reactions that occur upon their surfaces.

Nuclear energy is produced when the nuclei of atoms of elements are either split or combined. The two main ways that nuclear energy can be harvested is through nuclear fission and nuclear fusion. During the process of nuclear fission, the nuclei of atoms are split. The preferred element to be used in this process is Uranium because of its simple separation ability.[2] Shooting neutrons at Uranium atoms causes their nuclei to split, releasing not only energy but other neutrons that will penetrate other nearby Uranium atoms.[2] This is known as a Chain Reaction. The second process, nuclear fusion occurs when atoms join together, or fuse. Extremely hot conditions are favored for the fusion of hydrogen nuclei to form helium atoms. These combinations cause explosions thus releasing huge amounts of energy.[2] In both these processes this energy can be harvested for supplying electricity or for the creation of nuclear weapons, such as the hydrogen bomb.

There are two types of nuclear reactors that are commonly used world wide because of the familiarity of creating them and the economics that goes into having one built and maintained. These two nuclear reactors are called the Pressurized Water Reactor (PWR) and the Boiling Water Reactor (BWR) which both operate very similarly. Using the heat created from the energy released by fission or fusion, the water is heated to a temperature great enough to start the creation of steam. The Steam then travels through streamline pipes where then it performs the greatest job of propelling the turbines, which then turns the generator and thus releases electricity that can be used to light homes, towns, cities, etc.

Both Animations are Data compiled from The British Antarctic Study, NASA, Environment Canada, UNEP, EPA and other sources as stated and credited Researched by Charles Welch-

“What’s more cost effective a nuclear power plant or our current coal plants?” When dealing first with the construction of these two plants, Nuclear power plants cost more to build than traditional coal power plants. The cost of construction for nuclear plants is higher because of the use of containment buildings and safety-related equipment that must meet higher standards than the traditional structures. The highest costly coal plant currently is the controversial Alliant Energy's coal plant that will cost an amount of about $1.2 billion dollars to build. While most Nuclear power plants cost between 3 and 5 billion dollars but only for construction. [3] In general, coal and nuclear plants have the same types of operating costs, maintenance cost and fuel costs. The biggest difference in cost is the price of fuel. Currently the cost of uranium is only at a fraction of the cost of fuel for coal and oil plants.[3] Several other economic issues exist when dealing with the creation, maintenance and disposal of nuclear power plants. First of all it takes approximately 4-6 years to construct a nuclear power plant, with its biggest downfall not being cost but delay.[3] The more delays that occur during the creation process means the longer waiting time for companies to receive revenue. Nuclear power plants must also have insurance in case of a nuclear or radiological incident enforced by the Price-Anderson Nuclear Industries Indemnity Act.[3] Each power plant must in total have insurance worth $10 billion.[3] At the end of a power plant’s lifetime, roughly about 50-60 years, dismantling and decommissioning must occur. Whereas in the United States, the Nuclear Regulatory Commission requires that the plant put money aside during its operating years for its decommissioning that could entail a cost of $300 million.[3] In an effort to mitigate global warming, the economics of nuclear power may be favored compared to current measures to mitigate global warming, such as carbon taxing, since the use of nuclear power does create CO2.

The politics of nuclear power harvesting have great effects on whether or not the plants will even operate. Although the U.S has the most nuclear reactors and produces the most electricity from nuclear energy, anti-nuclear movements did halt the creation and construction of new nuclear plants throughout the country. Currently there is one nuclear reactor under construction, beginning in 2003. But despite many opposition movements throughout the world, many nations are seeing the benefits that nuclear energy is producing as both an electricity generator and as a replacement to coal and oil power plants. Many countries find that their efforts to find other ways to harvest energy especially nuclear are efforts to mitigate global warming. As of today countries like Japan use nuclear energy that produces about 30% of their electricity.[4] More than half of Belgium’s electricity is nuclear. China’s nuclear program is beginning to increase and India is currently constructing several nuclear power plants. Despite the benefits that these countries have had with nuclear energy, in just as many cases anti-nuclear movements have won the battle. In Germany, social democrats working together with the green party had opposed nuclear energy and proposed to close the remaining power plants but are currently being reviewed and in Austria where a power plant was built but was never operated because of a vote by its citizens.[4] One country to have both benefits and disaster is France, who for example currently receives about 87.5 % of its electricity from nuclear energy.[1] The switch from coal and oil to nuclear energy has produced 18% less greenhouse gas per person, whereas switching back to coal and oil would actually increase greenhouse gas emissions to 25%. France currently has in operation 59 power plants producing a surplus in energy which it exports to surrounding countries such as Germany, Italy, Spain and others.[1] Nuclear power has also played significant negative roles in France where in July of 2008, 18,000 liters of solution containing Uranium where accidently released by Tricastin Nuclear Power Center. French authorities have banned the use of water from the Gaffière and Lauzon for drinking and watering of crops. Swimming, water sports and fishing were also banned. Approximately 100 employees have been documented to have suffered from some illness due to the exposure of radioactive particles that had escaped from a pipe.[1] This reactor has currently been shut down. Despite this accident, France is still in full production with its nuclear power plants, demonstrating it's current usage of nuclear energy as a great advancement towards mitigation of global warming. Although the death of 100 employees is grave, it is also good to know that through better advancement, accidents like this can be avoided. Also, the World Health Organization states that 2.4 million people die each year from causes directly attributable to air pollution.[5] This shows you that the deaths attributed to nulcear reactor accidents is far less numerous than the deaths that are occuring because of our current technologies to harvest energy.

While analyzing the many potential benefits that nuclear energy can have on our daily lives, one can certainly overlook the negative aspects and hazards that such energy can produce. The greatest major risks that these power plants and storage tanks have are the potential of spawning deadly radioactivity. In the fall of 1957, fire was responsible for the melting of several plutonium reactors in Britain’s Sellafield complex, spewing clouds of radioactivity into the atmosphere.[6] An official document shows that the radiation leakage could be responsible for dozens of caner deaths that soon followed. One of the worst disasters in nuclear power harvesting history occurred in Chernobyl, Ukraine in April of 1986.[7]Due to the faulty construction of a nuclear reactor caused it to literally explode. The effects of the explosion were numerous and evident that nuclear power has extremely horrendous side effects. The initial explosion killed two workers instantly but most deaths are considered to be part of the remaining fallout. In total, an official count of 56 deaths has been linked to be caused by cancer and as a consequence to the exposure to radiation.[7] Estimations show that there may be about 4,000 more deaths occurring because of radiation induced cancer out of the estimated 600,000 people that were exposed.[7] Many areas surrounding the Chernobyl site still remain off limits because of traces of radiation that thrives. This massive release of radioactivity not only had the potential to affect humans while breathing but by ingestion of food and drinks because of the contamination of water that was used for crops, that were then used to feed livestock, and that soon found its way to their dinner table and into their system. The fear of radiation poisoning lingered throughout the public because of the much contamination of products necessary for daily living, and the uncertainty of what really was contaminated and what was not. When dealing with nuclear energy I believe the one thing that we must have in mind is the proper construction and aftercare of these plants because as evident by past events their negative turnouts are nothing short of disastrous. 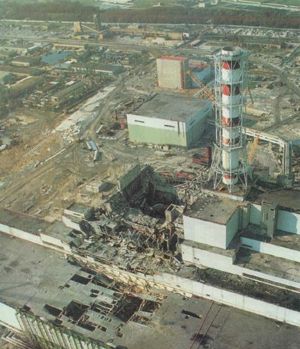 Many of these numerous disasters are what have halted the creation and expansion of nuclear power harvesting but in reality these problems could have been avoided with careful supervision over their creation and stronger technology. Despite the issues that may arise from the movement to nuclear energy, I believe its benefits further exceed its negative aspects. In my opinion nuclear power is not the only resource that is currently available to us that allows us to escape the byproduct of CO2, and whether nuclear power becomes the “thing” of the future, the bottom line is that it’s helping to mitigate global warming now.