The Sun provides Earth with as much energy every hour as human civilization uses every year.[1]

There are many factors driving our world in the direction of alternative energy sources, including soaring oil and gas prices, conflicts surrounding these goods, and the impending crisis of global warming. With the seemingly limitless amount of sunshine available to us, solar power is a very attractive and viable energy alternative.

Solar energy is emerging onto the global scene with Japan and Germany being dubbed the most advanced solar power markets in the world. Closely following these two countries are the United States and other European nations. However, due to high costs, solar power still only accounts for 1% of the US’s energy supply [2], and less than .01% of global energy supply [3]. These numbers are far behind those of other alternative energy options such as wind and geothermal power. With such great potential, solar power’s failure to penetrate the mainstream energy market can largely be attributed to economic and political problems.

The two major categories of solar energy devices are photovoltaics and solar thermal. In both cases, the energy from the sun is converted into another form of energy that can be used for heating and cooling purposes, lighting, and the basic generation of energy.

Photovoltaics is the “direct conversion of light into electricity at the atomic level” [4]. Using the photoelectric effect, solar panels absorb photons of light and, in exchange, emit electrons, and “when these free electrons are captured, an electric current results that can be used as electricity” [5].

The most common material used in this process is crystalline silicon, which makes up for 90% of all photovoltaic devices. The other 10% can be accounted for by thin film technologies. Solar thermal uses curved mirrors, called parabolic-trough systems. The use of solar thermal could consist of a singular trough for household purposes, or multiple rows of troughs covering great distances for larger scaled projects. These troughs are tilted towards the sun, allowing the mirrors to focus the sunlight more intensely – a process called Concentrated Solar Power, or CSP. This intense sunlight heats up a pipe full of oil that runs behind the mirrors, which is “then used to boil water in a conventional steam generator to produce energy” [6]. This method increases the intensity of the sunlight greatly and has the ability to increase efficiency by up to 50%.

When considering photovoltaics, solar thermal, and any kind of alternative energy, one must consider the economic pros and cons that are attributed with each approach. While the undertaking of energy conversion is an expensive and daunting task in the short run, the employment of such strategies has the potential not only to pay for themselves, but also create upwards of 250,000 of green jobs, which would result in economic booms[7]. The benefits of green jobs, especially those concerning solar energy, will be felt globally, spanning all social and economic barriers; estimates show that global “revenue from the installation and purchase of solar PVs will grow into a $69.3 billion market by 2016” [8].

Considerable costs, however, remain the most significant deterrent associated with the implementation of solar power. Currently, solar power costs about 30 cents per kilowatt-hour, whereas coal and natural gas cost 5 and 4 cents per kilowatt-hour respectively. These facts combined with intimidating upfront costs have caused many consumers to avoid investing in the solar power market. However, since solar power is a relatively young field, it is also ever improving. Much of the expense of photovoltaics panels is due to the costly production materials; “the high cost of crystalline silicon wafers representing up to 50% of the solar module cost has led the industry to find more cost-effective materials for solar cell production” [9]. Much research is now underway to improve efficiency – which currently rests at about 20% for both photovoltaics and solar thermal (uneptie) – while at the same time reducing costs. Prices have declined an average of 4% each year for the past 15 years [10], and due to improvements such as the material change mentioned above, it is believed that “within 10 years, photovoltaic power will be competitive in price with traditional sources of electricity” (U.S D.O.E). Another explanation of this dramatic reduction in price can be explained by simple economics. The market for solar power experiences economies of scale, meaning that as output of solar powered devices increases, the price decreases. This is due to the fact that the high initial costs of employing solar power are being spread out over more and more devices, therefore lowering the cost per unit.

For some purposes, the use of solar energy is already more efficient and cheaper than other alternative energy sources. Especially in remote locations, the use of solar power is practical because the devices are “highly reliable and require little maintenance” [11]. The absence of significant additional annual costs after initial set up distinguishes solar energy from many other alternative energy sources, some of which become more expensive with time.

Governments worldwide have the ability to remedy the economic problems faced by the solar energy market by providing subsidies and tax breaks to consumers. At the same time, however, inaction on the part of governments, and poor legislation can cripple the market.

In light of recent economic problems and concerns about dependency on “dirty” energy, governments are beginning to take their role in the implementation of alternative energy seriously. For example, in 2005 the United States introduced the Solar Investment Tax Credit. In October 2008, the life of this 30% tax credit on the “purchase and installation costs” of solar energy was extended for another eight years [12]. "By passing this bill, Congress has finally given the solar energy industry 'policy certainty' that will attract investment, expand manufacturing and lower the cost of solar energy to consumers" [13]. The extension of this legislation will create upwards of “440,000 permanent jobs and unleash $325 billion in private investment in the solar industry” (Solar Energy Industries Association). Similarly, the German “Feed-In Law” gives tax breaks to customers who use solar generated electricity. Thousands of new solar energy installations per year, and the country’s prestigious reputation in the realm of solar energy, can largely be attributed to this legislation.

The United States Department of Energy is stimulating the solar market by granting a total of $5 million in funding to fourteen businesses in the solar industry. As a result of this funding, it is expected that 1,000 solar roofs will be installed across the country [14].

While most governments are well intentioned when it comes to alternative energy implementation, solar power still faces some politically-imposed barriers. California’s Clean Energy Initiative contains one such hidden obstacle. According to Sue Kately, although the CEI would “require 50% of energy from renewables by 2050,” it would also “effectively kill the state’s solar sector by disqualifying any project under 30 megawatts,” which includes most household solar projects [15].

Governmental action and support is key for any alternative source of energy, because without tax breaks and subsidies, many projects are simply too expensive to undertake. With government subsidies reducing the costs of solar power, it can be employed on any scale and can be efficient for use in single households as well as large solar cell plants that provide energy to a network of individual houses and buildings. Depending on one’s expectations and purposes for solar energy, the possible scale of a project can be extremely varied.

The employment of solar power technology can occur nearly anywhere. Any location that receives a steady amount of sunlight can be utilized for solar energy purposes. Logically, areas with more intense and longer lasting sunlight would be ideal. Such factors depend on the latitude of the location and also the typical weather of the region. As shown on this map, the Southwestern United States, Northern Africa and parts of the Middle East on average receive the most sunlight whereas much of the oceans in the Southern Hemisphere receive much less sunlight. 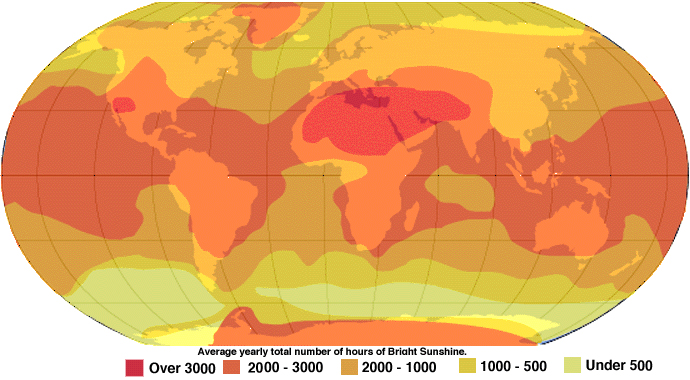 The use of solar energy is very practical in remote areas that cannot connect to traditional electricity grids. Although solar energy would generally be the cheapest variety of energy for these locations (because they need not connect to grids thousands of miles away), with installation costs averaging between US $400 and $600, inhabitants of these regions generally cannot afford solar systems.

In this way, solar power has the potential to revolutionize the culture and way of life of now underdeveloped societies. By providing electricity for lighting and the purification and heating of water, many lives could be drastically changed by solar power. This further demonstrates the importance of reducing cost and increasing efficiency in solar energy devices.

As governments expand their roles in promoting and improving solar systems, the practicality of solar energy is beginning to catch up with the potential benefits that can be reaped from it. Solar energy has the potential to save households, small businesses and large industries millions of dollars in annual energy consumption and can reduce our carbon emissions by millions of metric tons over the next few decades. An ever-changing and ever-improving area, solar energy is capable of eliminating our dependency on foreign oils and forms of energy that is harmful to our environment.

You have good info, but I'm confused about how you want to organize this! When it's in a big paragraph the reader usually starts to skim. Try checking out what other people have done with the organization of their sites. You might benefit from having a few clearly defined sections with labels instead of a long essay piece. Most Wikipedia sites are in this segmented form rather than essay form. Some examples of sections you could have are: Background, Methods, Costs, Risks, and Conclusion.