Wind energy is a renewable power source driven by the Earth’s natural air current. Since this source of energy is clean and inexhaustible, it is regarded as the foremost available and implementable technology. Many political and social responses towards implementing wind turbines are optimistic, and most of the economic effects of expanding existing wind resources are positive. The encouraging energy potential and economical benefits of wind power would make the impact of wind power expansion substantial.

Stephen Pacala and Robert Socolow state that global climate problems can be resolved using seven available technologies. “Humanity already possesses the fundamental scientific, technical and industrial know-how to solve the carbon and climate problem for the next half century” [1]. Their proposal is to focus on the international stabilization of anthropogenic greenhouse gases and the eventually decrease of net emissions to zero. One of the seven essential technologies is mass utilization of wind energy. 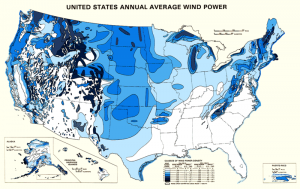 Wind can provide a clean, renewable source of energy because it is created by the natural heating and cooling of the Earth by the Sun. It is then circulated around the world by a wind current, which is further modified by terrain and bodies of water. Wind turbines generate power by converting the kinetic energy created by wind into mechanical energy. Mechanical power can then by converted into electricity through generators [2]. The theoretical potential of wind power is much greater than the current global energy consumption [3]. Wind power potential is estimated to be 72 TW, which is sufficient to supply the world’s energy consumption. The growth of the wind energy market has been increasing in the last decade as the search for sources of renewable energy gained momentum. Currently, wind power accounts for only 1 percent of global electricity production; however, by the end of 2007, the growth rate of wind power increased by 27% [4]. Wind power will be a future contributor to the world’s energy supply in the near future.

Electricity production from wind turbines is primary affected by wind conditions and it is critical to choose wind turbine sites efficiently. Wind speed is not constant and therefore the capacity factor is only 20-40% [5] of the theoretical potential. The capacity factor is limited due to the intermittency of wind, making it difficult to incorporate wind energy into the power grid competitively. There are also other factors that limit the number of viable locations for wind farms. Turbine placement does not rely solely upon wind; other construction factors include proximity to the grid system, cost of land and capital, and environmental impacts of construction. The site of a wind turbine is essential to successfully developing economically efficient of wind farm.

Energy harvested from wind turbines can be used to power small-scale residential areas or large scale utility complexes. Larger turbines can produce 100 kW to several megawatts. These large turbines are used as part of the electrical grid. There are also smaller turbines that are used for residential purposes. Small turbines - producing less than 100 kW - are used in conjunction with a battery storage device to benefit places that are not connected to the power grid[4]. As the commercialization of wind power expands, the future distribution of personal wind power will grow. While there are costs and challenges of implementing wind power, there are substantial gains derived from expanding the scale of wind power.

The economic benefits of wind power make it one of the most financially viable renewable energy sources. The cost of the turbine itself is the majority of the capital investment of wind energy. “Of other cost components, dominant ones are, typically, grid-connection, electrical installation and foundation, but other auxiliary costs such as road construction could represent a substantial proportion of total costs” [6]. Wind farms are generally located away from demand centers, which require additional initial investment to construct new power stations and lines. Nevertheless, once a wind farm is constructed, the marginal cost of maintaining a plant is less than 1 cent per kilowatt-hour [7]; which is much less than that of a nuclear-1.8 cent kWh-power plant. Since wind energy has one of the lowest marginal operating costs, it has a quicker payback time than many other technologies [8]. Wind power supplies sufficient energy at a competitive price, and would be economically viable to produce on a larger scale.

Achieving a wind-powered society would involve major policy commitments from national governments and international regulatory bodies. “A wedge of wind electricity would thus require 50 time today’s deployment” [1] in order to displace coal electricity by 2054. In North America potential wind farm sites amount to 6% of U.S. land and can supply “more than one and a half times the current electricity consumption of the United States” [5]. The U.S. Department of Energy reported that 20% wind energy could be achieved by 2030. This increase in national wind energy will require an increase in 2000 wind turbines per year in 2006 and 7000 by 2007. Existing federal policies in the U.S. support the expansion of the wind industry by offering incentives and subsidies for constructing a wind farm. The Energy Policy Act of 2005 “ created the Clean Renewable Energy Bond (CREB) program, effectively offering interest-free debt to eligible renewable projects” [9]. At the state level, tax incentives and energy funds have been a catalyst for wind power expansion. Other countries are also using green power markets to stimulate the growth of wind power; Canadian and German governments are providing incentives such as tax credits and assured grid access for wind turbine construction. The scale of making wind power a viable replacement for coal and fossil fuels is not insurmountable.

Wind power can be implemented globally without substantial negative externalities. The social-cultural benefits of wind energy parallel the economic benefits. Because many potential wind farms locations are found in rural places, there could be a significant global development of rural and out-laying areas. The construction and development of wind turbines could create a substantial amount of green jobs and stimulate markets in other areas such as in electrical and steel manufacturing, and other associated industries. Along with market growth, people are less affected by the externalities of wind power than other means of renewable energy because of the low amount of environmental disruption associated with wind turbines.

Wind energy does not directly create further negative environmental effects. Wind power does not directly use fuel and produce anthropogenic greenhouse gases like methane, N20 and CO2. The main environmental concerns are the effects during construction. Energy will be consumed during the manufacturing and transportation of materials. Objections to wind energy state that turbines are birds are other migratory avian species are in danger of colliding with turbines. However, recent studies by the “RSPB stated in its 2004 information leaflet Wind farms and birds, that "in the UK, we have not so far witnessed any major adverse effects on birds associated with wind farms". Moreover, a recent report published in the journal Nature confirmed that the greatest threat to bird populations in the UK is climate change [10].

Wind energy is an inexhaustible resource that can be harnessed by existing technologies efficiently and economically. Wind turbines can be implemented throughout society because they are affordable and can come in different sizes that are appropriate for the scale of the project. Furthermore, wind technologies can be implemented on a global scale. Government incentives have positively affected wind energy. The theoretical potential of wind power is sufficient; the major roadblock for further development is inaction. As Pacala and Socolow suggest, “in confronting the problem of greenhouse warming, the choice today is between action and delay” [1]. Wind power not only has the potential to become a main supplier of electricity globally, but it could able be more cost-effective, efficient, and environmentally sound than current sources of energy production. This makes it a feasible replacement to existing energy forms. Simultaneously, an increase in the scale of wind energy projects could decrease the emissions of greenhouse gases and help combat global climate change.