Then no one really knew what to do with them. For the next few decades, the nature of the Russian peasant was one of the biggest issues of public debate in the intellectual circles of St. Petersburg and Moscow. The issue was especially important, as the peasant had been made into such a symbol of the “real” Russia, as well as because the success of agriculture after the emancipation was crucial to Russia’s economic survival. Levin’s obsession with the issue of the nature of the peasant in Anna Karenina was far from unique. 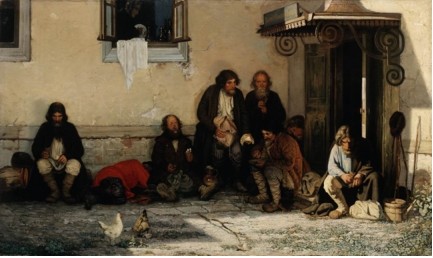 Miasoedov’s painting shows the peasant members of a ‘zemstvo,’ an organ of local government instituted after the Emancipation.