Sports games are a genre of video games based on popular sports and sports leagues throughout the world. Most frequently, the gameplay is designed to simulate playing the sport; however, there may be many other aspects to the later versions of these games, such as owner/managerial roles, specific player customization and development, mini-games, etc. Additionally, these games are sometimes designed around fictional sports.

Tennis for Two, as played on a oscilloscope.

The first ever sports video game, and arguably first video game of any kind, was created by William Higinbotham in 1958. The game, Tennis for Two, was played on a oscilloscope. Although Tennis for Two predates Pong by about 14 years, the content of the games were similar. However, Tennis for Two was played from a side angle, as opposed to a top-down point of view.

Interestingly, Higinbotham only made the game so visitors would be entertained when stopped by his place of work, the Brookehaven National Laboratory.[1]

Pong was the first mainstream video game released in 1972. It was also a sports game, as it is basically a crude interpretation of tennis. Atari is the company responsible for putting Pong out there, and it's creation was somewhat accidental. Allan Acorn designed this game as a training exercise assigned to him by Atari co-founder Nolan Bushnell. Bars would buy Pong arcade systems in order to attract patrons from miles around. A typical Pong Machine would bring in $30 to $40 a night, which was previously unheard of.[2]

Atari first released their flagship Atari 2600 console in 1977. Mattel came out with their own console, the Intellivision, in 1979.[3] Atari mostly focused on arcade-style games, but they dabbled a bit in the sports world. Mattel, on the other hand, went directly after visually stunning sports games. Both companies released at least one game in football, baseball, basketball, hockey, soccer, and racing.

Over the last 14 years, the Tony Hawk's Pro Skater series has released 18 different game on a variety of platforms. The very first title was Tony Hawk's Pro Skater (1999) and the most recent title was Tony Hawk's Underground Pro (2013). The first game was considered revolutionary and the series dominated the genre, as the games realistically simulate the act of skateboarding. The games allowed gamers to play as their favorite popular athletes and included a variety of bonus content, such as the ability to design your own skatepark. 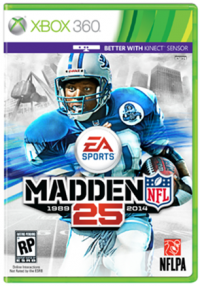 One of the most notable of the sports video games is the Madden NFL franchise. The game emulates the play of american football within the National Football League. In addition to exhibition and season play, the game features the ability to play as a specific player through his career, various mini-games, and online play.

The first video game featuring John Madden, a popular football personality, came out in 1988, and was primarily for computers running MS-DOS. The second version of John Madden Football, which came out in 1990, was the first for consoles, running on the Super Nintendo and Sega Genesis platforms.[4]

Over the next 25 years, the Madden franchise has managed to sell 99 million units and earn EA Sports more than $3.7 billion in net revenue.[5] The annually released game is widely known as one of the most successful sports franchises. Their latest release, Madden NFL 25, which came out in August 2013, celebrated the 25th anniversary of the game and featured Barry Sanders. 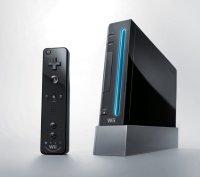 The Nintendo Wii console and controller.

Industry revenue has declined in the past five years after record-breaking sales of Wii's sports games carried the industry in the early part of the period. Football-themed video games are the most popular genre and are expected to account for about 33.1% of volume sales in 2012.[8]

The two companies are the largest competitors in the sports video game market. A recent poll of gamers showed that 63% preferred 2K Sports' releases over those of EA Sports (who received 37%).[9] 2K Sports recently announced they are ending their MLB 2K game series and will not be released MLB 2K14.[10] There will be no MLB sports game offered on the Xbox One. The MLB: The Show series now operates as a monopoly on the Play Station 4.